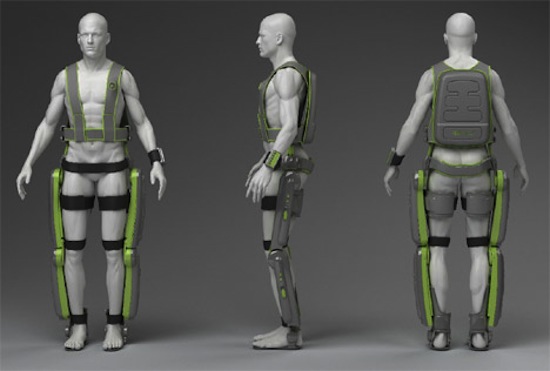 A UK woman is the first to head back home in an exoskeleton suit that restores her mobility, allowing her to once again stand and walk. Claire Lomas was paralyzed after a 2007 injury sustained while horseback riding. With the help of the ReWalk exosuit, she was able to finish the London Marathon earlier this year — a fundraiser that was also part of the testing regimen for the suit, exploring how it would hold up under pressures that no one will probably ever subject it to again. Now the suit is coming home with her to stay, making her the proud owner of the first of what could be many exoskeletons showing up in homes all over the world in the coming years.

The ReWalk consists of a two powered leg braces that respond to the way the user tilts either forward or backward in them, along witha  specialized backpack that provides power to the suit. Military officials from the US and Israel have expressed interest in the suit, which is still in the prototype stages of its development, and this will be among the suit’s first round of tests in the real world.

The suit isn’t cheap, coming in at a cost of nearly $72,000. But it shows a lot of promise in restoring mobility and function to people who have lost the ability to walk, both as a tool for rehab and as a more permanent solution for individuals like Lomas. While it’s not appropriate for everyone who has lost mobility, Argo Medical Technologies, the company behind the exoskeleton, estimates that up to a quarter of a million people worldwide could benefit from the suit.