Civilization V is Coming! And the Map Finally Uses Hexagons! 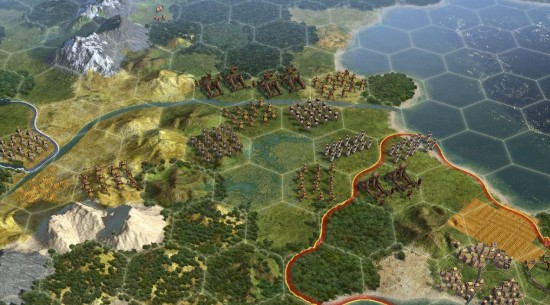 In an announcement that is surprising no one, Firaxis has announced that Civilization V is under development. And while much is being made of the game’s promised features — including additional civilizations, leaders who speak in their native tongues, and long-range bombardment by units (but wait, wasn’t that in Alpha Centauri a decade ago?) — no one seems to be covering the drastic change apparent in the screenshots.

That’s right — the map uses hexagons instead of squares! What is this, some Avalon Hill monstrosity? Sid Meier must be rolling in his #9 Power Grid slot.

The series probably isn’t experiencing a descent into grognardia — Firaxis’ press release claims that the tiles will allow for “deeper strategy.” But with all of the shiny chrome being appended to this latest title, the central question for hardcore fans remains. Civilization games have lacked a robust modding community since the mid-90’s, as successive games have become too complex for fan communities to effectively modify. After all, if games like Oblivion have such robust modding communities that mods for mods are now the trend du jour, why shouldn’t gamers be able to create their own campaigns, scenarios, and units?

Oh, it might be so that they have to buy Firaxis’ official expansion packs. There would be that!