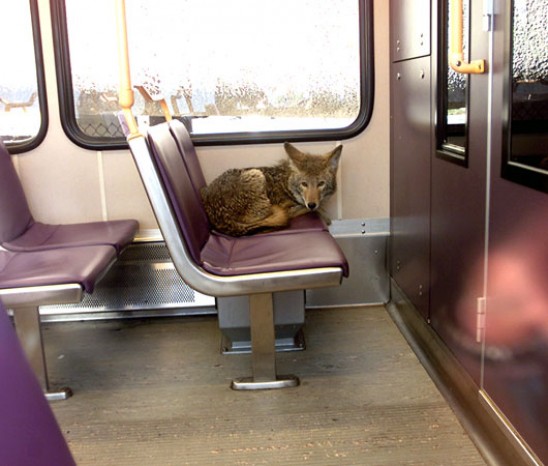 Contrary to how celebrity gossip and popular television period pieces tell us humans react, a new study has found that living near a city in an urban area is actually beneficial for the coyote. Instead of having an affair in a swanky ad office with a coworker who is also having an affair, coyotes that live in an urban area end up being monogamous, sticking with the same mate — without straying — for as long as the study examined them.

The study, performed by scientists with Ohio State University, took genetic samples from 236 coyotes in the Chicago area — which is estimated to have around one thousand to two thousand coyotes — over a six year period. They found that not one coyote strayed from their mate, whether that was to have a coyote love affair, or dump one mate for another. Co-author of the study, Stan Gerht, postulates that the monogamy is actually what might help the coyotes survive in an urban area, which is normally not an environment suited to wild animals. Though urban areas may not be tailored to wild animals, Gerht does note that food for wild animals can be abundant in cities, and in an environment with a large amount of available food, female coyotes can produce a large litter of offspring. Without a loyal mate, the female wouldn’t be able to raise a large litter on her own. So, coyote monogamy in cities might actually be to ensure the future of the species.

If you got a little nervous when you read the bit about genetic samples, the team obtained them from the coyotes in as harmless a manner as possible, using padded foothold traps and non-choking snares to subdue the coyotes, which then had radio transmitters attached so the team could easily and safely track them. The genetic samples were used to test the DNA and trace the coyotes’ family trees, which coincided with the findings of pure monogamy.

Gerht and company also found that when the female is pregnant, the male will stay by her side throughout the period, performing every single task with her, whereas if the female was not pregnant, the pair might physically separate to hunt or mark their territory. The study found that the only time the coyotes left their monogamous relationship was through death.

Who would’ve thought that wild dogs take human marriage vows more seriously than the species that write them.