Samuel Beckett Used to Drive André the Giant to School, All They Talked About Was Cricket 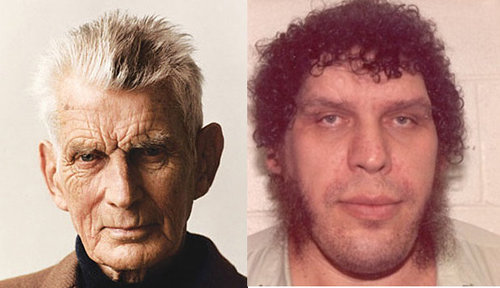 We don’t normally post many “today I learned” posts, but this one is just too awesome. Anyone who has ever watched wrestling back in the good ol’ days or has seen The Princess Bride knows that André the Giant was a massive, humongous — ahem, giant — guy. The famous Hulk Hogan was billed as 6 feet 7 inches tall, and everyone should remember this iconic moment between he and André, in which André made a guy who billed as the average height of an NBA player look tiny. When André was 12, he was already over 6 feet tall and weighed 240 pounds. He was too big to fit on the local school bus and his family didn’t have the money to buy a car that could deal with his weight if it drove him to and from school.

Samuel Beckett, Nobel Prize winner (literature) and esteemed playwright, probably most noted for Waiting for Godot, bought some land in 1953 near a hamlet around forty miles northeast of Paris and built a cottage for himself with the help of some locals. One of the locals that helped him build the cottage was a Bulgarian-born farmer named Boris Rousimoff, who Beckett befriended and would sometimes play cards with. As you might’ve been able to guess, Rousimoff’s son was André the Giant, and when Beckett found out that Rousimoff was having trouble getting his son to school, Beckett offered to drive André to school in his truck — a vehicle that could fit André — to repay Rousimoff for helping to build Beckett’s cottage. Adorably, when André recounted the drives with Beckett, he revealed they rarely talked about anything other than cricket.