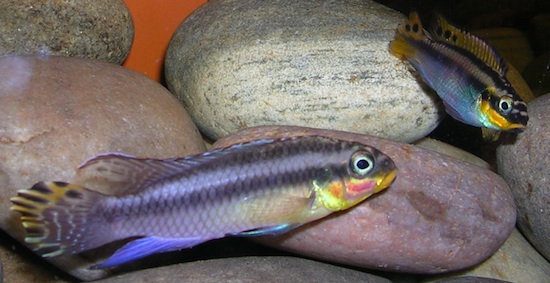 Pelvicachromis taeniatus may sound like an exotic name, but you’ve probably seen these dwarf cichlids in your local aquarium before. The fish normally dwell in African rivers, but are also popular as fish in domestic aquariums. When they’re being fed floating food pellets, though, one of their most interesting evolutionary developments is going to waste. It turns out these cichlids hunt with a highly developed sense of infrared vision.

In their native habitat, cichlids live in shallow rivers that can often be murky with silt. In that sort of environment, being able to see the heat generated by prey like insects, freshwater shrimp, and smaller fish is a much more reliable hunting method than depending on conventional vision alone. The fish may also use their infrared vision in other forms of communication, such as mating, say researchers. Females were found to have scales on their bellies that reflect light in the infrared spectrum, suggesting that hunting is not the only place where infrared vision plays a role.

Still, researchers were surprised to find infrared vision in these fish, as true infrared vision is an uncommon adaptation. Some snakes can “see” the infrared spectrum, but do so using specialized pit organs near their nose rather than their actual eyes. The cichlids in question, though, seem to actually capture IR radiation with their eyes and process that information visually. Researchers think this could be a clue that other animals in the area, like birds and other fish species, could also have developed infrared vision over the years.