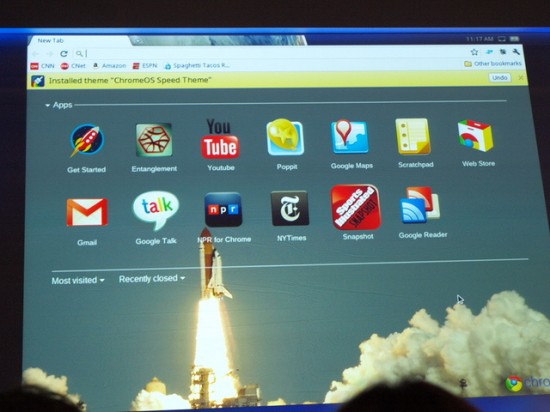 This afternoon, Google finally unveiled its long-awaited Chrome operating system. Bits and pieces of information concerning Chrome OS have been floating around for some time now — most concretely that it would a) be built primarily for the web and b) that unlike Google’s Android mobile operating system, Chrome is made for personal and desktop computers. But today marks the most comprehensive look at the operating system that Google has given us. (Note that the current, non-final build of Chrome OS is and has been available for download at http://getchrome.eu/download.php).

Some tech pundits have criticized Google for the delay in Chrome OS’s release, saying that with the advent of mobile computing and the popularity of Android, that ship has already sailed. Google, however, contends that this is a distinct product, that it will fill a currently unfilled gap in what users need, and — perhaps most daringly — that the netbook isn’t dead. (And they’ll put their money where their mouth is by working with manufacturing partners to create Google-branded, Chrome OS powered netbooks.)

So what defines Chrome OS?

“Web is the new native.”

This line, uttered by a Google engineer during the Chrome OS Q&A this afternoon, is a good summation of the philosophy behind the new operating system: Google contends that whereas even a few years ago, it wasn’t possible to build browser-based applications that could rival applications that lived on users’ hard disks, it can finally be done now. What follows from this is that the computer’s operating system no longer needs to worry much about stuff that’s stored on the disk; rather, the web is most of what matters. (Hardcore PC gamers, graphic designers, and a decent number of other people may disagree with this premise.)

Chrome OS is essentially the Chrome browser running atop a Linux kernel. “Chrome OS is nothing but the web,” Pichai said. The browser is the only local application. All other apps must be run inside the browser. Google has an interest in pushing users towards web-based applications, including its Google Apps suites of office tools, but the company also says that Chrome OS is an effort to improve security. Each online app is confined to its own sandbox. 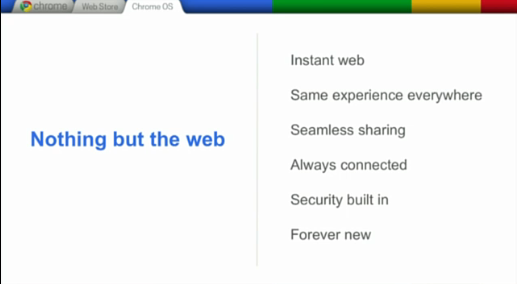 Google breaks down this “nothing but web” philosophy into the six points listed above. Briefly: Chrome OS is built for speed. One manifestation of this is that boot times, setup times, and app resuming times are all lightning fast: Google boasts that an out-of-the-box Chrome OS-equipped PC is just 60 seconds away from use, and that resumption of tasks from sleep mode will no longer be the drag it is on other operating systems. To loosely quote their presentation, ‘the delaying factor [in online use] is users moving their hands and typing the query.’

Changes propagate across all Chrome OS devices near-instantly: If a user deletes an app from one Chrome OS machine, it’ll be gone from any other Chrome OS device used by that same person within ten to twenty seconds. But Google is also sensitive to privacy concerns, with sharing that allows people who use the same PC to keep their browsing histories and settings hidden from one another. Moreover, at the hardware level of their devices [more on those in the next section], Google is implementing something called “verified boot”: The core initial part of the operating system will be loaded on read-only memory that can’t be tweaked by software, only by physical access. Lastly, the operating system will be automatically updated every few months, hence “forever new.”

The unveiling of Chrome OS comes synced with the announcement of Google’s new web store:

Google Inc showed off a new Web store for games, news and other software applications on Tuesday in an effort to carve out a bigger role in the next generation of Internet media and entertainment.

Electronics Arts demonstrated a game that goes on sale on the “Chrome Store,” which is expected to go live soon. It will also sell applications to run news from National Public Radio and the New York Times.

While the web is central, many of these applications will still work offline.

The web store is live for Chrome browser users at https://chrome.google.com/webstore.

Google isn’t content to release Chrome OS into the wild and have that be that; they also want hardware that can realize their ambitious vision. To that end, they’ve partnered with a number of companies, including Acer, Samsung, Intel, Qualcomm, and Verizon, on a wave of netbooks that they say will go on sale globally in mid-2011. Acer and Samsung will manufacture the devices, Intel will power them with Atom processors, and Qualcomm will supply them with its Gobi technology, which allows 3G mobile Internet access worldwide.

Google will be taking on the Apple-AT&T alliance with a partnership of its own with Verizon for 3G service. Interestingly, this will require no contract, and the first 100 MB of data used each month will be free for two years. Additional data can be bought by the gigabyte or using an unlimited “day pass” — $9.99 for unlimited data for a day. As is the case with iPad users, heavy data users will probably want to connect to the Internet using Wi-Fi, but the free 100 MB plan sounds like a nice means for light Internet use on the go.

Google is fulfilling the predictions of some of its naysayers in one way: Chrome OS will not really be available for popular consumption in 2010. Google is, however, offering a limited number of Chrome notebooks now for beta testing. Amusingly, these will be called “Cr-48″s after an isotope of chromium, and they will not have caps lock keys (to keep the Internet less shouty) or function keys (because who uses those?); they’ll also be equipped with a “jailbreak mode.” 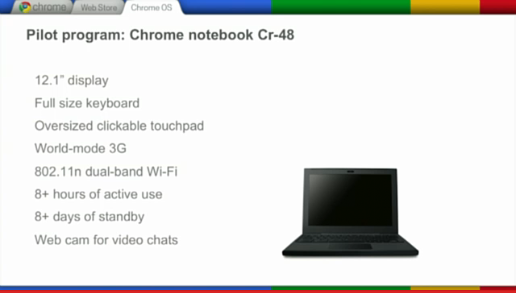 You can apply for a Cr-48 at http://www.google.com/chromeos/pilot-program.html.

If all of this leaves you with any unresolved questions, check out Google’s demo video below: