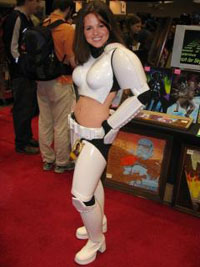 Apparently, there’s a photo making its way around the web of Delaware Republican Senate candidate Christine O’Donnell dressed up as a midriff-baring Stormtrooper (left). Christine O’Donnell is on the record as being a Lord of the Rings fan (“Tolkien’s portrayal of women in Lord of The Rings is bold and courageous. The bittersweet complexities of true womanhood are daringly depicted in each of the female characters,” she once wrote), and we wouldn’t be surprised if she harbored a fond spot in her heart for Star Wars.

But that picture’s a fake.

If “Christine O’Donnell”‘s seemingly out-of-proportion head didn’t tip you off, check out the photo below, which appeared in a 2006 San Francisco Chronicle article about “Femtroopers” and which the article says is even older: It’s also the first picture that comes up when you Google “female stormtrooper.” (With SafeSearch on, of course!) Can we keep the debate focused on policy, now, where of course it always has been up to this point where Christine O’Donnell is concerned? 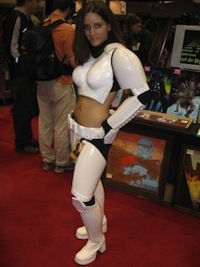 (Rumormiller via Fark via TDW)