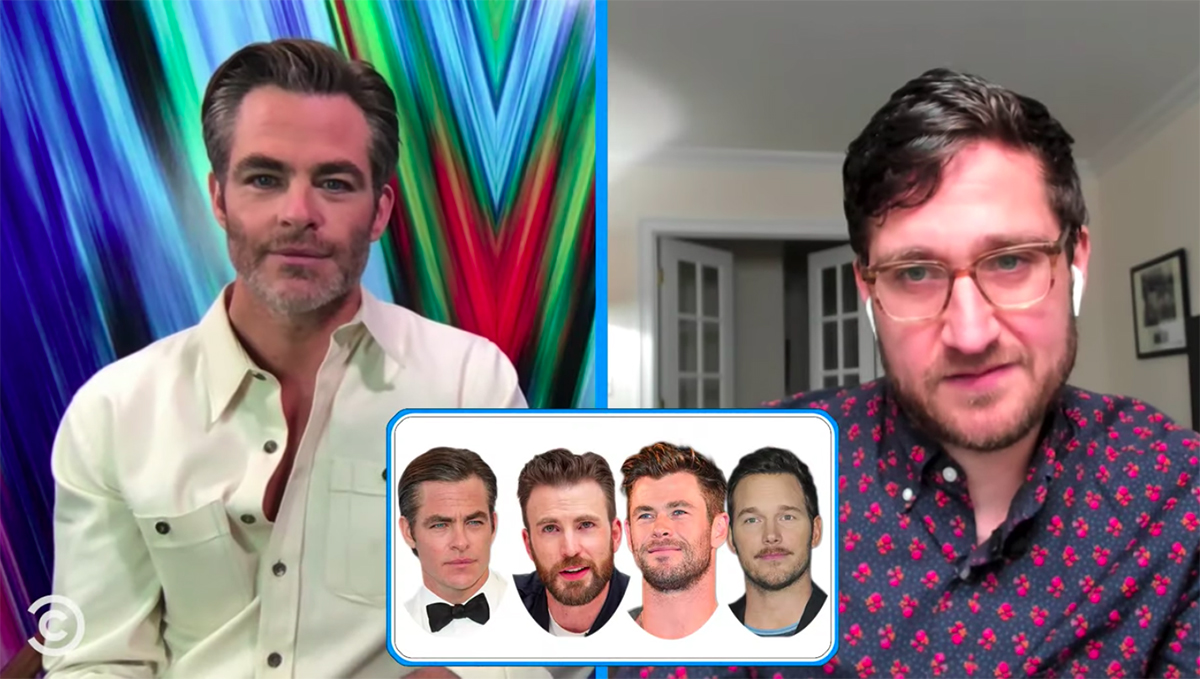 The debate over who is the best Hollywood Chris is a point of contention on the internet. Maybe it’s been taken too far, maybe it’s just something we’re never going to agree on, but it has been a never-ending battle over who your favorite is. (Mine is Chris Pine). But now, we finally have a look into how Chris Pine actually feels about being compared to Chris Evans, Chris Hemsworth, and Chris Pratt!

In an exclusive clip for the Mary Sue, we get a look at Josh Horowitz and Pine talking it out on the latest episode for Stir Crazy!

“I feel like I’m the underdog right now so I’ll take all the support I can get,” Pine says when Horowitz says that he’s his “favorite Chris,” and honestly, we have got to fix this situation! Chris Pine is clearly the frontrunner in the Chris battle, and it’s time you all join me in this house.

The video is a fun look at what makes Chris Pine so exciting—meaning Josh Horowitz starts bringing up fashion, and Pine gets super excited about Don Johnson in Miami Vice. “Are you ready to tan that much though?” Horowitz asks, to which Pine enthusiastically responds “SURE,” and this is why, in my humble opinion, Pine should be in your top 2 Chrises, if he’s not your number 1. (I see you Evans fans, and as an Evans number 2er myself, I can respect the flip.)

The entire fashion section is great because I’m pretty sure Pine just says, “Yes, f**k, are you KIDDING ME?” about every choice, and it’s a fun look into his willingness to do anything. Never forget his beach relaxation look:

Chris Pine is out there living his best “Meryl Streep in The Post caftan realness” life. pic.twitter.com/1yYML09oq0

At one point, Pine just starts to play with his flip-phone. Yes, you read that right in 2020. Another reason to love Pine: He does not give a flying f**k about the 21st century, just thriving in his 1970s vibe without a care in the world. (That’s when flip-phones are from, right?)

Heading into the “Who Am I?” game, Chris Pine clearly does not know who Admiral Ackbar or who Buddy the Elf are. Please, someone ask him what his favorite color is, I beg you. But that was made clear when Pine was asked whether he would rather never watch a movie again or never read a book again and Chris Pine, a movie star, said he’d never watch another film. (In his defense, he did major in English at Berkeley.)

All great fun, but huge news for me … and I guess Mia Thermopolis … but if it came down to never acting again or ONLY acting in sequels to The Princess Diaries, Pine would rather be Nicholas Devereaux for the rest of his days. 2004 me is JUSTIFIED. In the end, though, Chris Pine knew that Josh Horowitz was just placating him in saying that he was his favorite Chris. Alas, though you can see the best Chris as Steve Trevor in Wonder Woman 1984 out on HBO Max and in theaters on Christmas Day.