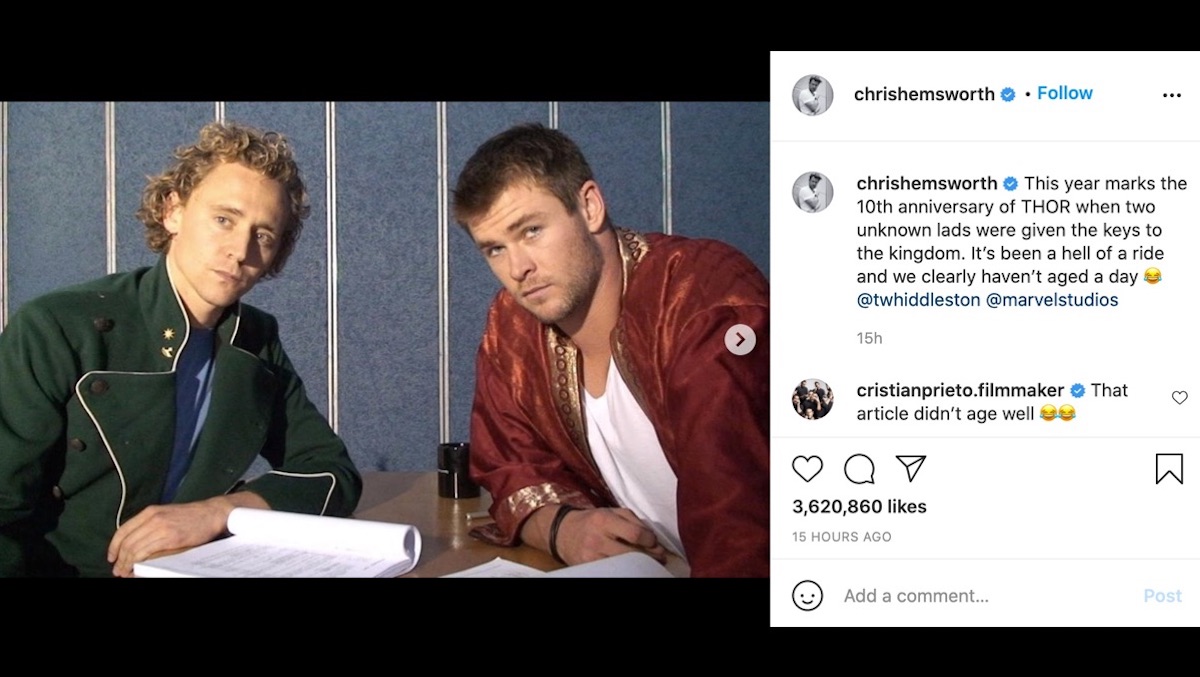 In a throwback Instagram post that set fans’ hearts aflutter with nostalgia, actor Chris Hemsworth cheekily recalled the big gamble Marvel took in casting the first Thor film. “This year marks the 10th anniversary of THOR when two unknown lads were given the keys to the kingdom. It’s been a hell of a ride and we clearly haven’t aged a day,” Hemsworth wrote. These days Hemsworth and his onscreen brother Tom Hiddleston are two of the biggest stars on the planet. But it wasn’t always this way.

2011’s Thor, directed by Kenneth Branagh, was set to be a big test for the Marvel Cinematic Universe. It was their first real Phase One movie without Iron Man and Robert Downey Jr. (The Incredible Hulk is not considered here for, um, reasons.) Thor would also introduce the greater Marvel cosmic universe, a significant departure from the more grounded Iron Man movies. We’d encounter godlike aliens, space royalty, sorcerers, the Asgard, Frost Giants, and a family saga that was Shakesperean in its scope (no wonder they wanted Branagh).

So Thor’s casting was crucial, and also notoriously far-ranging, with big names like Shia LaBeouf, Josh Hartnett, Channing Tatum, Jim Carrey, and more rumored to be under consideration for lead roles. According to Pajiba, Daniel Craig was at one point the first choice to play Thor.

Ultimately, however, Marvel went against its casting past and perhaps conventional wisdom, and cast relatively unknown actors in the key parts of Thor and Loki. Of course, Thor would still have star power in the form of Sir Anthony Hopkins, Rene Russo, Natalie Portman, and Stellan Skarsgård. But this wasn’t Doctor Erik Selvig, The Movie. The selection of Thor and Loki might make or break this thing. And Marvel gambled with the opposite of household names.

Hemsworth had appeared in a few TV series and briefly as the tragic George Kirk in 2009’s Star Trek. Hiddleston had also appeared in a handful of British TV series and films. One of them was a role as a regular on Wallander, the BBC’s adaption of a Swedish mystery property. And Wallander happened to star—wait for it—one Mr. Kenneth Branagh. While his Branagh connection was no doubt a point in Hiddleston’s favor, the actor originally auditioned for the part of Thor—though these days, it’s impossible to picture anyone else playing Loki.

On Instagram, Hemsworth’s post is also winking directly at a now-infamous Vulture article from May 19th, 2009 regarding the Thor casting. “Marvel Rolls Dice, Casts No-names for Thor,” reads the headline, as writer Mark Graham writes that “two virtual unknowns will instead be handed the keys to the Marvel franchise” and opines, “let’s hope they follow the J.J. Abrams route and put the money they saved in casting straight to special effects.”

Marvel’s big gamble paid off even more than they could have dreamed at the time. Hemsworth and Hiddleston were perfect for the parts, and their performances would prove vital in shaping the future of the MCU. Hiddleston’s Loki in particular became wildly popular with fans. “Had Tom not brought him to life in a way the audience responded to, it probably wouldn’t have gone anywhere,” Marvel Studios head Kevin Feige said of the character in the Thor: The Dark World commentary video above. Both Feige and Branagh were intensely involved and emotionally invested in the Thor casting process.

As it turned out, Hiddleston’s nuance in the role lifted every subsequent movie Loki appeared in and has evolved into an upcoming Loki show all his own. Hemsworth got to demonstrate his comedic chops beyond the brawn, which would eventually lead to a movie like Thor: Ragnarok, one of the MCU’s best, coming into existence. Only imagine what would have happened if a “big name” star at the time, like, say, Shia LaBeouf, who now stands accused of serious abuse and assault, had been cast. Thor showed that sometimes, a less recognizable face—at least at first—is a good blank slate for a character to begin with, no previous roles or Hollywood history attached.

Happily, we ended up with Hemsworth and Hiddleston, who still have great chemistry together and seem to maintain a fun working relationship. While we don’t know yet if Hiddleston will turn up in Thor: Love and Thunder, it’s hard to imagine that he won’t. After all, it was Hiddleston who once declared, “There is not Thor without Loki, there is no Loki without Thor.”

I loved Hemsworth’s post, but I’m left with a few questions about it. Like: what are they wearing? Were those some extremely early prototypes for Loki and Thor costumes? The colors are right, with Loki in green and Thor in red, but … hmm. Were the actors told to come in for a table read wearing whatever they had on hand? What’s going on here, guys?

Can you imagine anyone else playing Thor and Loki these days? Let’s talk in the comments.