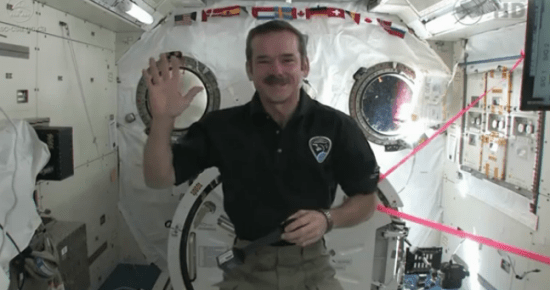 If there’s something cool to be done aboard the International Space Station, then Canadian astronaut Chris Hadfield is going to do it. He’s already talked to William Shatner, jammed with the Barenaked Ladies, and tweeted a Valentine while in space. Today at 4pm ET he’ll be taking questions during a Reddit Ask Me Anything. Our first question: Why you so awesome, Commander Hadfield?

Before being sent into space, Hadfield participated in a Reddit AMA about the mission. He answered questions about aliens, sex in space, but also dealt with real issues of spaceflight like loneliness. It was during that AMA that Hadfield promised to record the first song in space, which he did. See?

Hadfield announced the AMA earlier this morning on Twitter to his 380,426 followers:

Good Morning, Earth, from orbiting research ship ISS. Ask Me Anything – I’ll be on Reddit tonight to answer your questions, live from space!

In his last AMA, Hadfield answered more than 50 questions, so if there’s something you’ve ever wanted to ask someone in space, get your question ready now. You can follow along with the AMA or join in on Reddit.

What crazy thing should Hadfield do next from space? I think he should play me in space chess. Commander Hadfield, I look forward to your challenge.