We're still with him 'til the end of the line. 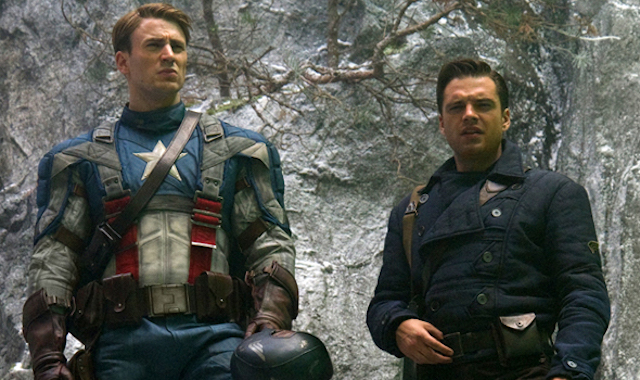 The Esquire profile by Maximillian Potter is worth reading in full, both for the deeply reported, revealing piece that sees the reporter leap out of a plane with Chris Evans, and for the pictures of bearded Chris Evans wearing glasses and reading books. But since the profile is bigger than Cap’s bicep, here are some of the crucial quotes.

On Trump and toxic politics:

Evans has made, and continues to make, his political views known on Twitter. He tweeted that Trump ought to “stop energizing lies,” and he recently ended up in a heated Twitter debate with former KKK leader David Duke over Trump’s pick of Jeff Sessions for attorney general. Duke baselessly accused Evans of being anti-Semitic; Evans encouraged Duke to try love: “It’s stronger than hate. It unites us. I promise it’s in you under the anger and fear.”

On taking stands that would make Steve Rogers proud:

Making political statements and engaging in such public exchanges is a rather risky thing for the star of Captain America to do. Yes, advisors have said as much to him. “Look, I’m in a business where you’ve got to sell tickets,” he says. “But, my God, I would not be able to look at myself in the mirror if I felt strongly about something and didn’t speak up. I think it’s about how you speak up. We’re allowed to disagree. If I state my case and people don’t want to go see my movies as a result, I’m okay with that.”

On his love life:

“I’m steering clear of those questions.” You can almost feel his heart pinch.

On his most famous role:

Settling in on the couch, he groans. Evans explains that he’s hurting all over because he just started his workout routine the day before to get in shape for the next two Captain America films. The movies will be shot back to back beginning in April. After that, no more red-white-and-blue costume for the thirty-five-year-old. He will have fulfilled his contract.

Chris Evans has never been shy about wanting to leave Cap behind when his contract was up—he’s keen to focus on more prestige acting roles and directing. Though he’s slated for the upcoming Infinity Wars, we weren’t sure if he would even make it through Civil War as Cap. And if the events of Civil War are any indication, Steve could be abandoning the whole “Captain America” thing entirely and heading in a more Nomad direction. After all, he threw down his iconic shield rather than sacrifice his friendship with Bucky Barnes/The Winter Soldier.

The Esquire profile drives home that Evans is excited for the day when his Cap contract is finished. Of course, we can’t see into the future, and it’s always possible that Marvel will find a way to lure him back with helicarriers full of cash. Who’s to say he won’t have cameos, or get bored in a few years and return to the franchise? Sure, Steve Rogers may die in Infinity Wars and make me cry a million tears, but this is superhero land, and there’s almost always a way back. Let me have this hope at least.

What we do know is that Sebastian Stan signed a whopping nine picture contract with Marvel (by contrast, Evans only signed for six), which would appear to position Stan’s Bucky Barnes to take up the shield. In the original comics Civil War storyline, Bucky assumes the Cap mantle after Steve Rogers’ death.

Since the MCU deviates significantly from comics canon, we aren’t 100% sure if they’ll go the Buckycap direction or potentially star-spangle Anthony Mackie’s Falcon instead—or do something completely unexpected. It is, however, increasingly clear that once he gets the chance to take off that spandex, Chris Evans can’t wait to return to civilian life.

(via Esquire, images via Marvel Entertainment)