Want to Solve a Murder with Chris Evans and Help a Charity? 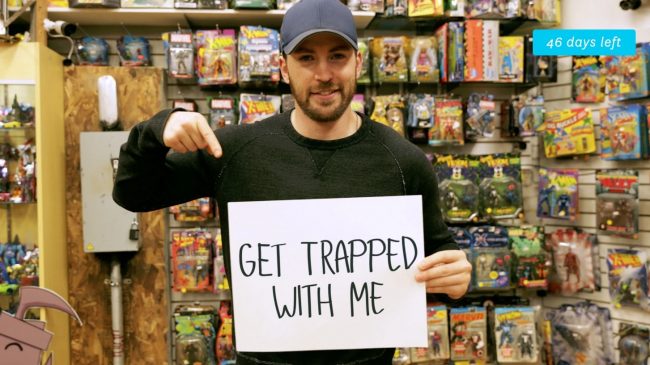 Imagine this scenario: you’re stuck in a room with Chris Evans for an hour or so where the two of you have to practice your communications skills to collaborate and solve a puzzle. Afterwards, you go out for dinner and then laugh about your exploits over beer. You might even discuss activism and get some funny stories from the Marvel movie sets! Now, what if I told you this could be real?

Evans is teaming up with Omaze in a new event for charity. By donating any amount from $10 to a few thousand, you’ll enter for a chance to get flown out to Boston, where you’ll get to go to an escape room with Chris Evans with three of your friends and grab some burgers and beers afterwards. Omaze writes:

You could solve a murder, get locked up in a haunted house, rob a bank or maybe even solve a murder in a haunted bank. No matter the narrative, it’s going to be a night you’ll never forget, complete with scares, laughs, and celebratory burgers and beer.

Even if you don’t win the grand prize, you can still get some cool items like an “Escape with Chris Evans” shirt or signed items just by donating a certain amount. The donations will go to supporting Christopher’s Haven, a supportive community of nine temporary apartments and a recreational area for “families of children being treated for cancer in nearby Boston hospitals.”

You can also give donations as gifts, which would be a pretty amazing Christmas present–y’know, if anyone wants to send some entries over our way. You can learn more and donate here.

(via Nerdist, Image via Omaze)