By all reports, Brie Larson is Marvel Studios’ first choice to play Captain Marvel. As of today, at least one other Marvel-based Captain agrees with that decision. In a panel at Wizard World Philadelphia, Chris Evans responded to a question about Brie Larson potentially playing the role.

The question was addressed to the entire panel, which included Anthony Mackie, Sebastian Stan, and Chris Evans. Chris Evans instantly grabbed his microphone to answer first: “I just heard about that! I really hope that happens. I love Brie Larson. We did a movie together back in ’09. We did Scott Pilgrim vs. The World. [audience cheers] I cannot say enough about Brie Larson. I think she’s phenomenal, and I really hope that happens.”

After that, Anthony Mackie cracks a joke: “I think they should go outside the box and cast a dude as Captain Marvel. [audience boos] No? Nobody? Oh, wow. Wow.”

Of course, we all know that the mantle of Captain Marvel was originally held by “a dude,” and rumor has it that Mar-Vell might even appear in the Captain Marvel movie. It seems fair to assume that the first Captain Marvel film will be an origin story, since most people aren’t as familiar with Carol Danvers as they should be. Knowing that, Chris Evans could even make a cameo in the film, given that Captain America was one of the characters who encouraged Carol to take up Mar-Vell’s mantle: 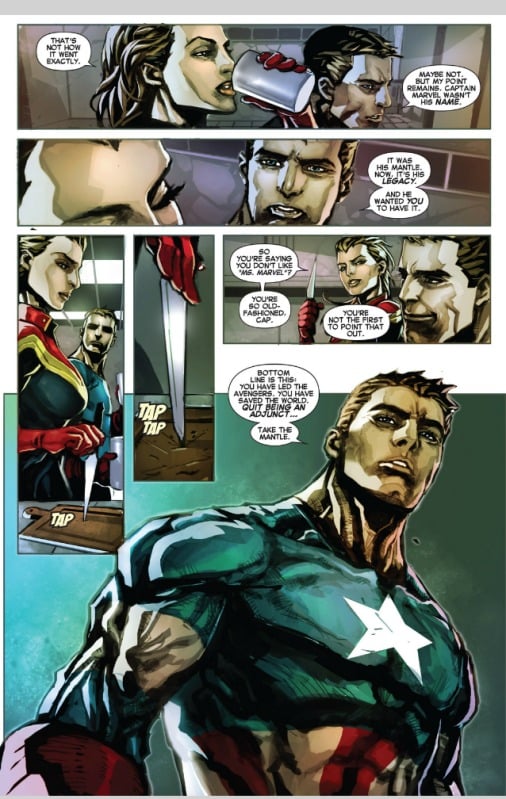 If Chris Evans and Brie Larson already work well together, then that’s a good sign for her getting cast. The only sticking point for casting her, however, is that she’s pretty young to be taking on the Carol Danvers role. She’s certainly got the talent, but Carol Danvers is usually in her mid-30s, often theorized to be about the same age as Black Widow.

In my recent piece about ageism and sexism in superhero movies, I pointed out that at age 31, Scarlett Johansson is already one of the youngest actors involved in the Marvel movies. Elizabeth Olsen is a bit younger, at age 27. Brie Larson is just 26, so she might well be the youngest actor taking on a superhero, if cast (she’s even younger than Melissa Benoist, who plays Supergirl). Many of the male actors in these movies are much older, with Robert Downey Jr. at age 51 and also managing to be the highest-paid actor in the world.

Although Brie Larson would no doubt be excellent in the role, it seems disappointing that Marvel is passing by the opportunity to cast someone older. Thoughts?