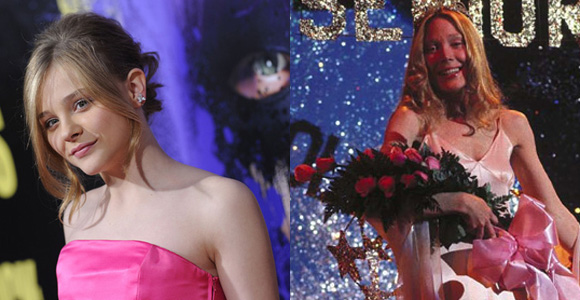 You know Chloë Moretz from her role as Hit-Girl in Kick-Ass as well as her more recent job, acting alongside Asa Butterfield in Hugo, but you soon may see her drenched in blood. She’s in talks to star in Kimberly Peirce’s (Boys Don’t Cry) Carrie remake.

The 15-year-old actress would playing the age-appropriate role of Carrie, the shy high school student who finds out she has telekinetic powers and uses them to seek revenge on those who’ve tormented her. Peirce is directing the film, which features a screenplay by Roberto Aguirre-Sacasa, the comic book writer hired to rework the Spider-Man: Turn Off The Dark broadway musical, and is based on Stephen King’s novel of the same name.

“The studio and Peirce have been meeting with actresses for the past two weeks,” according to Deadline. “Word all along was that while names like Dakota Fanning were circulating, Peirce and the studio had an eye on Moretz. The studio denied it at the time, but what actually happened is, Moretz didn’t meet with Peirce until last weekend. She got the job immediately.”

Seems like a sure thing then, although we should never count our chickens before they hatch, right? This wouldn’t be the young actresses first foray into horror (or remakes for that matter). She debuted her acting skills in 2005’s The Amityville Horror. You can see Moretz next in Tim Burton’s Dark Shadows opposite Johnny Depp. Carrie is expected to begin shooting this year for MGM/Screen Gems.

Thoughts on the casting?