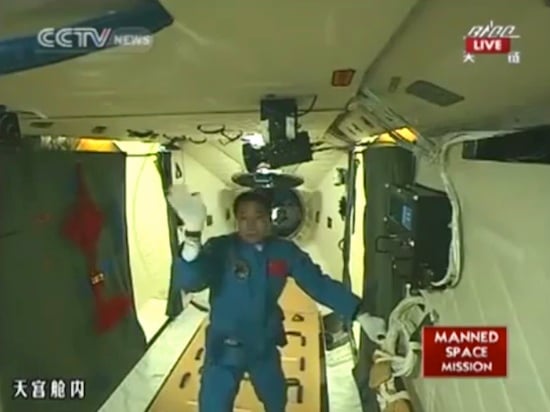 The Chinese Space Agency has succeeded in a months-long plan to inhabit the country’s first orbiting space station, Tiangong-1. The Shenzhou-9 spacecraft launched this past weekend, carrying the first female Chinese astronaut — or taikonaut, the craft docked with the waiting station. China is now the third country on Earth to have established a habitable orbiting outpost.

The mission launched this past Saturday with a three person crew. After two days catching up to the Tiangong-1 station, the craft docked quite dramatically. The docking maneuver was handled entirely by ground control, but a manual docking procedure is planned for later in the mission.

After watching the slow drama of NASA missions, the speed at which Shenzhou-9 comes into contact with the station is downright shocking.

Certainly not coincidentally, June 18 is the anniversary of NASA’s first woman in space, Sally Ride.

Though certainly a major milestone for the Chinese space program, Tiangong-1 is still considered a prototype. At 6.5 tons it is far smaller than the 60 ton station that China has planned to build in space. Though even that will still be a fraction of the size of the International Space Station.

Taikonauts will only be at Tiangong-1 for about two weeks. However, a second manned mission — Shenzhou-10 — is already in the works and slated to begin sometime in 2013.