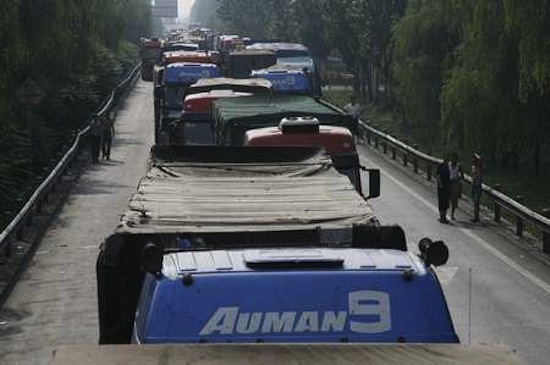 If you thought the traffic congestion to or from your vacation destination of choice was bad, be grateful that you weren’t traveling along China’s Beijing-Tibet Expressway: Thousands of trucks have been stuck there for nine days, according to a China National Radio report yesterday, and the 100-kilometer-long jam is not expected to dissipate until September 13, when the government finishes up construction on a key expressway.Global Times:

“Insufficient traffic capacity on the National Expressway 110 caused by maintenance construction since August 19 is the major cause of the congestion,” a publicity officer with the Beijing Traffic Management Bureau, told the Global Times on condition of anonymity Sunday.

Under current traffic regulations, the National Expressway 110 (G110), heading northwest from Beijing to Zhangjiakou in Hebei Province, and then heading directly west, is available to trucks with a carrying capacity of eight tons and above. The road suffered serious damage due to the greater volume of heavy trucks.

The Chinese government has sent 400 traffic police officers to the scene to “maintain order and to prevent further accidents.”

A limited number of detours exist between northwest China and Beijing, but these entail taking a much longer route, paying additional tolls, or both, and still don’t resolve a major bottleneck headed into Beijing, so many truck drivers are simply toughing it out.