Would You Buy A House Built on Top of a Shopping Mall? 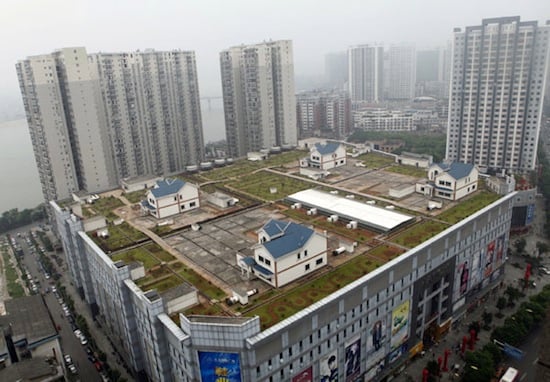 When I was kid, I thought it would be awesome to live in a mall. My family and I stayed in a hotel built in or on top of one: We could go get Starbucks for breakfast in our PJs and if I ever needed something new and shiny to validate my existence, it was readily available. Of course, even I thought there were limits to what living above a mall could be like; for instance, I always assumed that living in a building like that meant you pretty much had to live in an apartment. I was a foolish child. You can both live in a house and live above a mall, thanks to the Chinese. You can have it all, people.

Zhuzhou Jiutian Real Estate, a developer in Zhuzhou, China, the second largest city in the Hunan province, has actually built a set of houses on top of a shopping mall. It’s a perfect solution, really, for someone who loves or needs to live in the city, but wants suburban comforts like a lawn and personal privacy.

According to China Daily, putting gardens and other community areas with vegetation on building rooftops is rapidly becoming a national trend in China. So it’s not that this thought hasn’t been had before. In Beijing, all new buildings under 12 stories are legally required to feature “green rooftops.”

The “neighborhood” has four houses, each with a pretty large amount of surrounding property. Zhuzhou Jiutian built the houses at the same time as the mall itself. I’m pretty sure that made the process a lot easier. There is only one problem. While the houses are fully functional with working electricity and plumbing, they’re technically commercial structures. The houses will function as office space for the mall’s staff. What a waste!

Still, even if the design isn’t reaching its maximum potential, the roof-house design does show an interesting new way to think about urban planning.