Someone didn’t get the memo about the Chinese ministry of culture’s crackdown on “vulgar” promotions for online games: A Chinese gaming site called War Hero Online is offering inflatable Japanese sex dolls as grand prizes in exchange for accumulated in-game currency.

According to the BBC, the Chinese government has been unhappy with the rampantly sexual promotions used to hawk pay-to-play online games: “young women embroiled in sex scandals” and pornographic actresses have been hired as promoters for Chinese RPGs. As a result, local officials will be given the clout to make site operators “delete what is called vulgar content in online game promotions.” 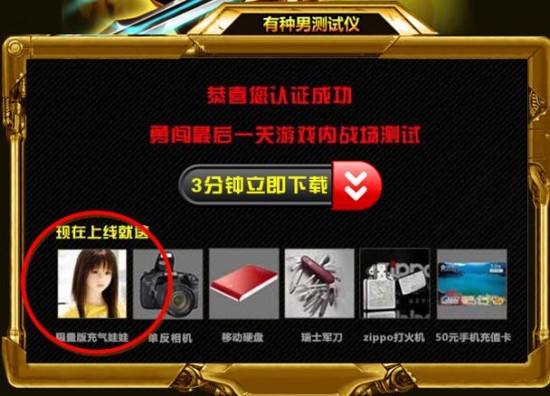 In this light, War Hero Online’s promotion is certainly … bold. We couldn’t figure out which model of Japanese sex doll they were selling, exactly, but a flurry of Chinese-language Google Image searching and Tineye leads us to believe it may be this kind (pics NSFW), which looks similar and appears to be very popular on Chinese auction sites. According to a translated Sootoo.com article, the grand prize promotion has “attracted the attention of many players”; apparently, it hasn’t yet attracted the attention of the newly empowered local censors.

(SooToo via MicGadget via GamePolitics via [irony!] Game Journalists are Incompetent Fuckwits)