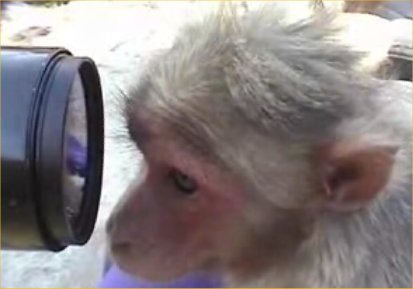 On Wednesday, the BBC will be premiering The Chimpcam Project, which was shot by and for chimpanzees. Briefly: a team of Scottish primatologists interested in finding out the sorts of images that chimps preferred equipped the chimps with “a camera enclosed in an orange bash-proof box.”

The chimps weren’t initially too interested, but gradually warmed up to it when they realized they had control over which videos they could watch on it. The group of chimps began to carry it around and share it, and: voilà! Chimp-shot video.

According to DiscoBlog, the chimps weren’t aware that they were making a film, but “the researchers are confident the chimpcam will help garner new info on how chimps see the world.” It may not be the most riveting view — it probably won’t earn the BBC smashing ratings. But it sounds like a cool, outside-the-box experiment, as well as a good example of collaboration between disciplines: according to the Chimpcam team’s website, it all began when a film producer interested in primate-shot video teamed up with primatologists interested in the same thing for different reasons.

The Chimpcam site also has a handy bullet-pointed list of chimpanzee-related information; as you may need to know the difference between the huu/hoo, the pant-hoot, and the wraa fairly soon, it’s well worth a glance.