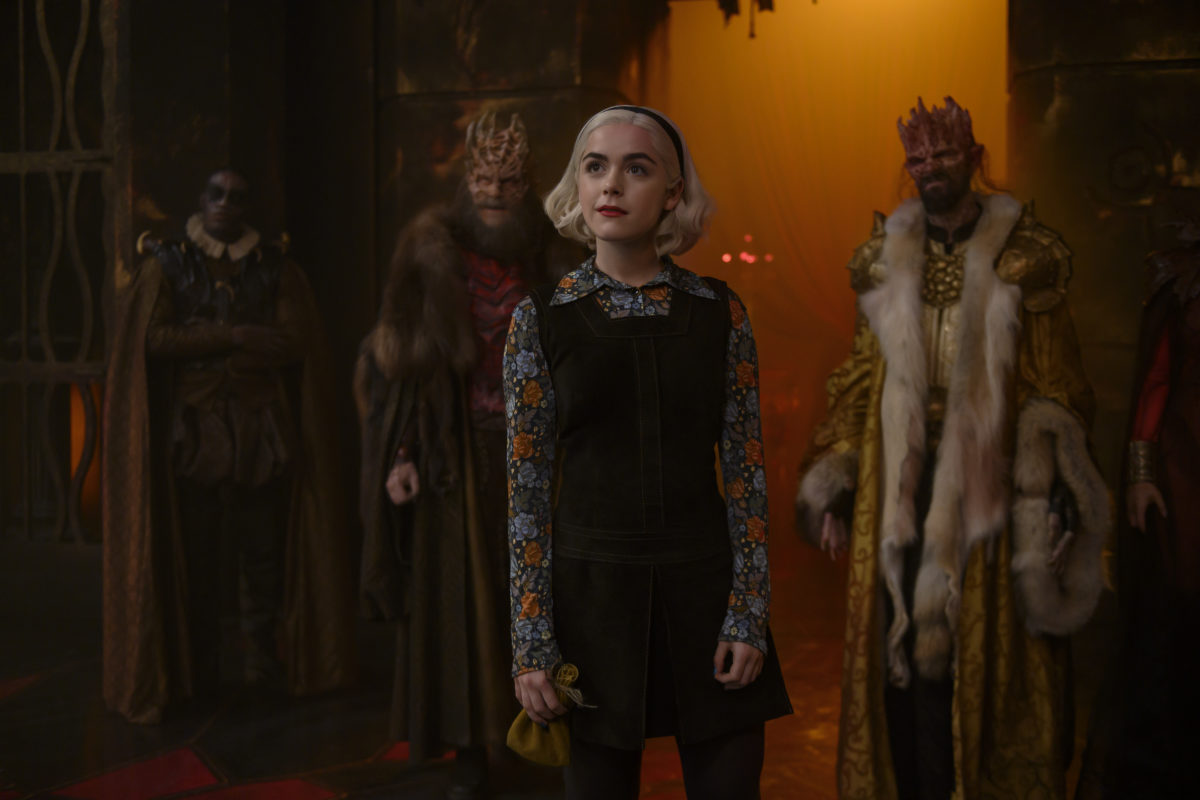 **Spoiler Warning for the first episode of The Chilling Adventures of Sabrina, Part 3**

The Witch is back and we’re so glad. The new season of Netflix’s The Chilling Adventures of Sabrina has dropped with more gothic camp and fiendish delights and so far we love it. So let’s talk about the first episode, that saw Sabrina take on a very archetypal hero’s journey: she went to hell.

It sounds insane to say but Sabrina’s journey through hell merged both The Wizard of OZ and Dante’s Inferno and it worked perfectly. Sabrina’s journey ends with a dash of Milton’s Paradise Lost and it’s all rendered is horrifying, beautiful images that would make any Renaissance poet swoon.

It stands to reason that Dante, who took the most famous journey through hell in literature would get a shout out in Sabrina. She’s assigned to read it by her poor, formerly possessed teacher Miss Wardwell and from that gets the idea of finding a backdoor into hell, so she can save her boyfriend. Just doing Dante would be fine here, but we get the first hints of Oz as Sabrina gathers three friends to join her. And to get through hell, they need special shoes. Not ruby slippers though, but shoes of the dead. I guess the Ruby Slippers technically belonged to a dead person too, so well-played.

After a spell that directly quotes Dante’s version of the inscription on the gates of hell – “Abandon all hope, ye who enter here” – Sabrina, Harvey, Roz and Theo arrive in hell on the “Shore of Sorrow” which sounds a lot like the way Dante arrives in hell himself, on the shores of the river Acheron (yes, Acheron is a term we hear in Sabrina for a trap for a demon).

Then things get extra Oz-y … instead of a yellow brick road to the Emerald City, Sabrina and co. must follow a stream of blood that flows to Pandemonium, the demonic capital of hell. Pandemonium, like many of the demons Sabrina has met (Beelzebub most notably) is not from Dante, but from Milton, but it works. This version of hell does have nine circles, like Dante’s, and they are creepy.

The team first meets a scarecrow … or rather, a field of crucified people being eaten by crows, and they speak to one – Theo’s uncle. At the same time Lilith – the former Madam Satan and current queen of Hell – is doing her best version of the Wicked witch of the West. Her minion is dressed like a flying monkey and Sabrina’s boyfriend Nick, with Lucifer inside him, is her Toto.

In a scene that best blends Dante and Oz, the gang enters the “Forest of Torment” full of talking and moaning trees. They get attacked by an evil tin man, which makes the Oz stuff pretty obvious, but I want to talk about the trees. Yes, there are talking trees in The Wizard of Oz … but there are also talking trees in Dante’s Inferno too!

In the second ring of Dante’s seventh circle is a forest of trees that used to be people, weeping and bleeding as birds peck at them. This is the forest of suicides and Dante breaks a twig off and chats with one. It’s one of the more memorable parts of the epic poem and it took Sabrina to make me realize that … it might actually have influenced L. Frank Baum’s Oz. Maybe.

After the Forest of Torment – where they pick up a very Oz-like singing flower that could put them to sleep forever, the episode goes a bit more into straight-up horror, with the kids getting trapped in a truly terrifying version of high school with their dead principal. Eventually, they’re freed and Sabrina has a pretty friendly meeting with Lilith and ends up taking her throne in hell (typical). But the encounter ends with the group returning to earth with a Latin version of “there’s no place like home.”

I loved this whole journey, and I loved how incredibly well the synthesis of these two seemingly disparate stories worked. But it’s actually not surprising that they did.

Not to get too Lit 101, but there are certain stories that humanity likes to tell over and over, the journey to another world being one of the oldest. From The Odyssey to Alice in Wonderland, it’s a staple of Western culture (and even Eastern if you also look at classics like The Journey to the West). This is a very roundabout way of saying it was so extremely cool to see a pulpy, Netflix horror show combine two of those fundamental stories its first episode of the season.

There’s a lot more symbolism and mythology to unpack as we dig deeper into part 3 of Sabrina’s Chilling Adventures, including several Riverdale connections, and it promises to be a wicked good time.