A Letter To My Ten-Year-Old Self, Regarding The Game Child of Light

There are a lot of things I’d like to advise you on—puberty, life lessons, warnings about all the stupid stuff you’re going to do once you become a teenager—but right now, we need to talk about a video game. I know you think you’re bad at games. That’s kind of funny to me, because you play a lot of games on Mom and Dad’s computer. You play adventure games, puzzle games, and endless hours of Oregon Trail. But you’ve sorted these types of games into a separate category than the games the boys at school play, the games with fighting and monsters and princesses that need saving. You’ve got it in your head that those are the cool games, and they’re not meant for girls. Even if they were, you know you suck at them.

Because, see, I also know you’re having a tough time fitting in at school (I promise it gets better). You know within your heart of hearts that you’re a girl, but you’re not into the things that the other girls are. Books and stories are safer than the playground and more fun by far, but even there, you can’t find a reflection of yourself. You love Star Wars and Star Trek, but there aren’t many girls in those stories, and the boys always get to do the coolest stuff. You love The Hobbit, but there aren’t any girls in that. You love Disney movies, but the girls always need saving, and the best thing they can achieve is marrying a prince. You’re supposed to like princesses, but they’re largely boring, and they never get to fight dragons. You’re starving for an adventure story with a girl like you in it, or rather, a girl for you to look up to. A girl who is smart and self-reliant. A girl who can use a sword but doesn’t have to dress like a boy to do so. A girl who inspires her friends to do great things and who never fails at being brave.

Let me tell you about Aurora.

Not Sleeping Beauty Aurora. A different Aurora. She’s a princess, yes, but she’s not a princess like you’ve ever seen before. Her story starts on a sad note. It starts with her dying. She was sick, and her father is heartbroken. She wakes up in a fantastical land called Lemuria, which is more beautiful than I can properly describe here. There are lush trees, gauzy waterfalls, flowers with glowing wishes hovering around their stems. Above the clouds, there are floating islands. Below the ocean, tunnels lined with vibrant crystals. There are monsters, of course. Fiery flying serpents, archers made of tree bark, ghosts that wail and moan. But there are good guys, too—cozy Hobbit-like wizards who smoke mint leaves, a thriving town of smartly-dressed mice, a clan of bear-like warriors with painted masks. There’s treasure everywhere, of course, hiding behind waterfalls and tucked away in secret caves. There are ancient temples, magical fountains, castles in the sky. And the whole thing is made to look like it was painted with watercolors. You would adore getting lost in this world. With as much as you love Narnia… yeah, this is right up your alley. 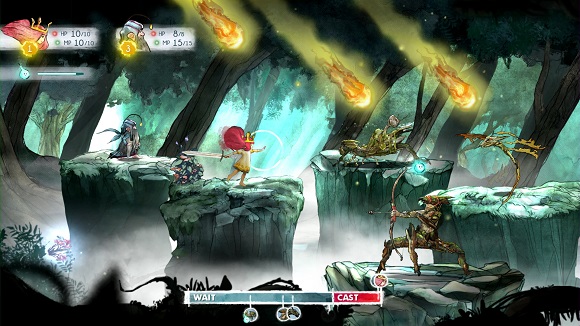 Aurora doesn’t know why she’s in Lemuria, but she’s determined to get home. She knows her father must be missing her, and there are signs that he’s gotten into trouble in her absence (she’s saving him, see). But Lemuria’s in trouble, too. It’s been taken over by the evil Queen of Night, who has stolen the sun, moon, and stars. It’s up to Aurora to save the day, and she’s well-equipped for it. She’s brave. She’s kind. She’s physically tough, but she uses her brain, too. She makes friends along the way, and what’s really cool is that they’re an even split of boys and girls (this is a pretty rare thing in the stories you’re used to). Her friends all have special skills they can use to help Aurora. Sweet jester Rubella, for example, can heal Aurora when she’s hurt, and fraidy-cat Finn is a cracking good wizard, despite being skittish. As for Aurora, she wields a shining sword (she pulls it out of a stone!), and she learns to use magic, too (that’s the other good thing about this story—she has to learn stuff). She never has to pretend to be a boy, and no one ever, ever says anything like “but you’re a girl!” I know you’d appreciate that.

The gameplay would be perfect for you, too. Remember how you don’t believe you’re good at cool games? I know the reason why. Five years ago, your friend Matthew stuck a Nintendo controller in your hands (you’d never used one before) and booted up Super Mario Bros. It was really frustrating, right? He waltzed through level after level, and you couldn’t even get halfway through the first. He teased you about it, and you felt stupid. It didn’t occur to you that he’d had lots of practice. You just figured that you were bad at any games that required you to move fast. Kindergarten was a long time ago, but that idea stuck, and you still don’t know any girls that play video games (I bet a lot of them do, though—they just don’t talk about it). The commercials on TV make it clear that video games are for boys, and girls aren’t supposed to be interested in fighting monsters, anyway.

Here’s the thing—that thinking is causing you to miss out on a whole bunch of games you would totally love, which in turn is going to give you a pretty steep learning curve to clear as you get older. Child of Light is an RPG, which is… okay, let’s just say it’s a more complicated type of game than Carmen Sandiego. But by the time you play Child of Light as a grown-up, you’ll have played so many RPGs that it’ll be too easy for you. I never lost a fight. I never saw a “game over” screen. I beat the final boss in one try and was a little bit bummed that it had been such a cake walk. Which is not to say that I didn’t enjoy the game. I did. A lot. Lemuria is breathtaking, Aurora is awesome, and the combat is fun even though it’s a breeze. But I wish I had played it when I was you.

About six years from now, one of your friends is going to hand you his copy of Final Fantasy VIII (your first RPG) and the strategy guide that goes with it. It’ll be months before you give them back. You’re going to fill an entire spiral bound notebook with loot grind routes and boss fight strategies, and the pages will be grey and torn from how many times you’ve erased things that didn’t work. You will love that game, but beating it is going to be hard for you. It requires a mindset you’ve never encountered before, and it will be years before you feel confident in it. And even though you’ll spend the next decade-and-a-bit playing RPGs, even though you’ll get good at them, they will always be a little less intuitive for you than they are for your friends, who played them rigorously during the time you thought you sucked at video games.

Child of Light is rather like Final Fantasy, gameplay-wise, but it’s much more accessible to newcomers. I wish you could’ve cut your teeth on something like this. It’s a great entry-level game (and not just for kids—I think grown-ups who have never played an RPG before would do well in starting here). You could’ve learned the skills that you’ll need later on, and you would’ve done it within a story in which girls—princesses, even—are powerful. I’m sorry you didn’t have something like that. But I’m happy that kids in my time do (boys, too!).

Keep having fun, kiddo. Never forget that you’re as strong as the heroes you pretend to be.