Power Play: Why Check, Please! Is Redefining Success in Comics 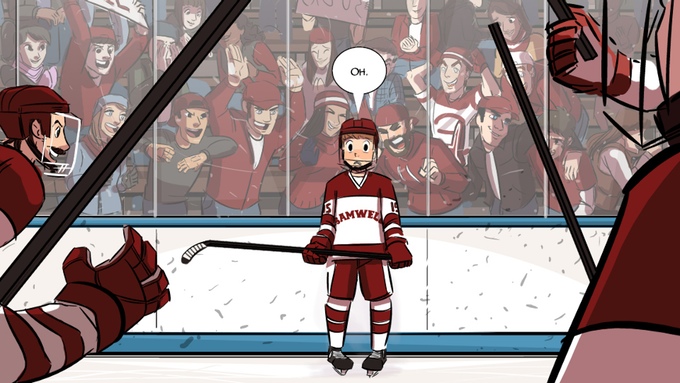 Sometimes finding success as a woman or person of color in the entertainment industry (comics, movies, television, you name it) can feel like being a gay figure skater trying to make it on a hockey team full of frat boys. It’s a violent bloodsport where small, diverse voices can get crushed by the powerful guys that dominate the game…but sometimes, those little voices learn to adapt and find a way to succeed and thrive in a media climate stacked against them, building on their unique strengths. And sometimes the audience or the dreamy captain falls in love with the tiny gay boy. That’s what’s happened with Check, Please!, the webcomic sensation that’s breaking records and barriers—and putting the mainstream on notice.

Check, Please! is a webcomic by Ngozi Ukazu. Ukazu, a first generation Nigerian-American, started the comic in 2013 between completing her undergraduate degree at Yale and grad school (which she now has also completed). What started as a fun experiment to practice her drawing and play around with a few ideas Ukazu developed while writing a screenplay developed into a multipart comic that updates consistently and has developed a massive following.

The story follows Eric “Bitty” Bittle, a chipper figure skater from Georgia who ends up on the hockey team at the fictional Samwell University. Bitty, who loves baking and Beyoncé, encounters a diverse cast of characters on the team and develops a connection with the enigmatic team captain, Jack Zimmerman. Much to readers’ delight, instead of . The comic is published exclusively on Tumblr, and now enjoys a huge following and has inspired fanfic, cosplay and a vibrant fandom.

In some ways the comic’s huge success on Tumblr isn’t shocking. Check, Please! tapped into an audience already obsessed with slash (that is, male/male romance) and more than a little interested in hockey; believe it or not, stories about real hockey players are the most popular type of sport fanfic on Archive of Our Own by a mile, with over 12,000 works tagged in the sub-genre as of this writing. Still, a large part of the comic’s success comes from the attitude Ukazu took when she first started. “I’m writing a story for myself which is appealing to a certain audience,” Ukazu explains. The story Ukazu wanted to read was very much the kind of content (a mainly cheerful, slow burn queer love story) fans were starved for, but the mainstream media simply isn’t giving them.

This comes in part from the fact Ukazu is a fangirl herself and cut her teeth in fandom during high school. The audience for Check, Please!, according to Ukazu, is predominantly female, like much of the audience for slash fiction. Far from being an anomaly, this is a norm in fandom, and even in comic book readership women make up a huge portion of the market, if not the majority. You’d think with numbers like this we’d have more queer stories in comics beyond side characters or angsty, tortured heroes, or even more stories in general where queer romance is the focus. However, this doesn’t seem to process for mainstream publishers; “there’s a whole group of people getting ignored,” says Ukazu.

And it’s a shame that the mainstream comics industry isn’t interested in telling stories like Check, Please!, because they’re leaving a whole lot of money on the table doing so. Created with the simple goal of compiling the comics covering Bitty’s freshman year in a physical anthology, the Check, Please!: Year One Kickstarter earned $74,290. Since then, readership has continued to grow. The current Kickstarter, which will fund books for Year Two as well as a reprint of Year One, has grossed nearly $250,000 in pledges as of this writing, with over three weeks to go.

“I don’t think I can fully process it now, to be honest,” Ukazu says of the Kickstarter success, noting that she doesn’t feel the money is hers until fans have the books in their hands. She also notes that though the success of Check, Please! is impressive, it’s not unique. Ukazu pointed to other successful webcomics and Kickstarters that either feature queer and/or minority stories or are being made by women and people of color. “I think mine may get attention because it made so much so quickly, but if you add them all up it’s really impactful.” Ukazu and other artists like her are also finding support on Patreon, where backers can contribute small amounts each month to support their favorite independent content. “It’s all happening through crowdfunding.”

Hopefully the rest of the industry is catching on, if not for the sake of telling diverse stories and supporting artists, then perhaps, as Ukazu puts it, out of “pure avarice.” As noted in a widely circulated Twitter thread, the success of Check, Please! and properties like it shows both the viability of these stories and the failings of the outdated business model the comics industry relies on. “There’s an audience out there hungry for these stories. Maybe they don’t need these audiences, but if they like money, they should make stuff for them,” Ukazu says. Instead of waiting for the industry gatekeepers to catch up, fans and creators are putting their trust directly in each other and reaping the rewards.

Of course, if Marvel and DC don’t catch up soon, it’s not of great concern to many creators. In this climate, many women and people of color don’t even consider writing for the Big Two because they can find a supportive and vibrant audience elsewhere ready to dole out their hard earned cash, as well as land opportunities with smaller publishers. Ukazu certainly has. Not only has Check, Please! been a success on its own but it’s “helped my career by showing there’s an audience for my brand of storytelling.”

In the same way, the success of Check, Please! and other webcomics helps burgeoning writers, and certainly many fans as well. Fans have shown that they are willing to put up major cash to support the stories they love, especially when those stories fill a void in the market. If that’s not enough to get the industry’s attention, maybe we can start baking them pies while belting Beyoncé in their kitchens. Certainly worked for Bitty.