Charlotte York Is the Best Character on Sex and the City 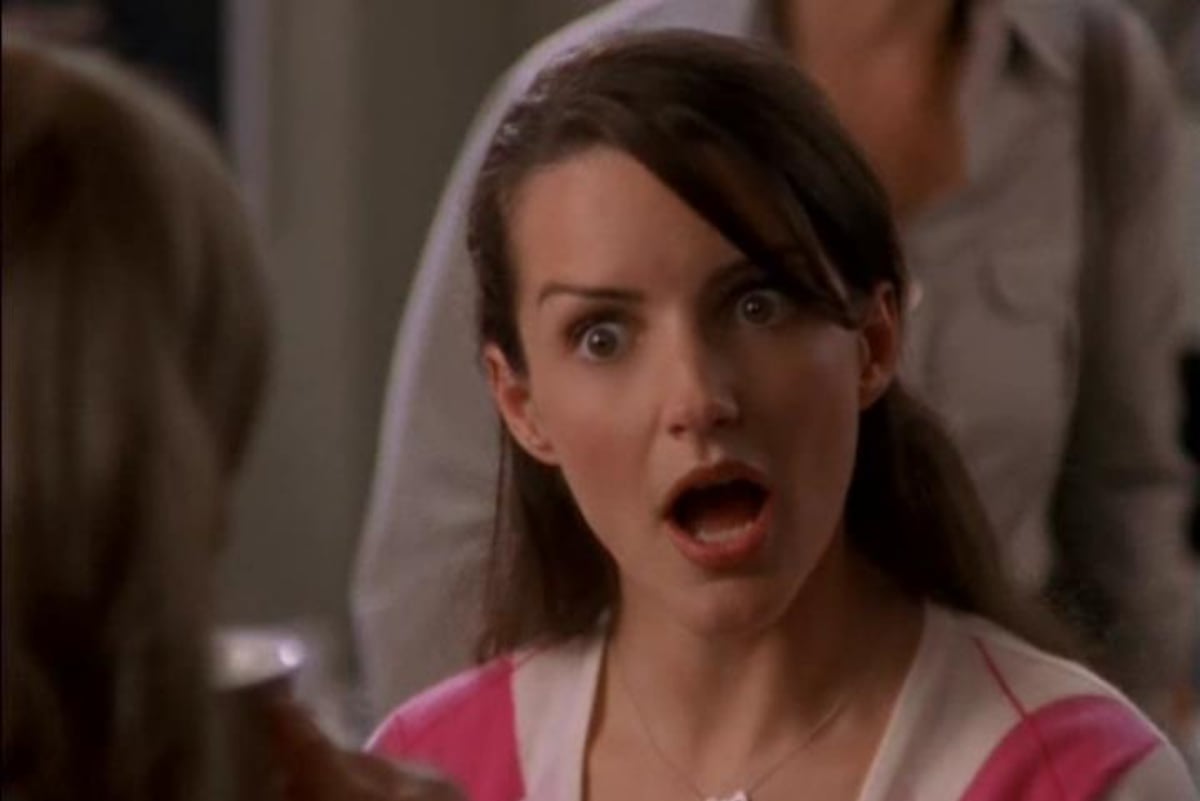 With Cynthia Nixon running for Governor of New York, Twitter was talking about how being a “Miranda” is no longer seen as a negative, but as a symbol of independence and feminism. Now, as a relatively new, but a fanatic devotee of Sex and the City, I can say that beyond a doubt there was something more negative you could be than a Miranda, and that’s a “Charlotte.”

When I started watching the show around two years ago, I was prepared to fall in love with Miranda who I saw as the white Maxine Shaw (Living Single came first, sorry not sorry). Yet, as I watched the show with my partner, the character I found myself falling in love with, sympathizing with and rooting for the most…was Charlotte York. Yeah, it freaked me out too.

Because you aren’t supposed to like Charlotte, she’s a prude, she’s dumb, she’s obsessed with men! But as I watched the series I came to the realization that Charlotte is probably the best-developed character on the show and has one of the best character arcs throughout the show’s run.

First, we need to address the things that are often held against Charlotte as a character: she is a dumb prude who only cares about men, marriage and living a traditional life.

Charlotte is a Prude:

Charlotte only Cares About Men & Marriage:

This argument I find to be disingenuous because for all of Miranda’s cynicism and Samantha’s casual sex and Carrie’s…Carrie-ness, all of them are in search of partnership and fulfillment (even if it is just sexual) from men. Charlotte is just the only one who is upfront about the fact that yes, she wants to get married and have a family.

Throughout the series, all of the women judge themselves by their ability to get men and the relationships they maintain. Carrie laments on her birthday that she doesn’t have a “special guy” or a “soulmate.” Samantha goes to great lengths to “keep tabs” on Richard after they get back together because she’s paranoid he will cheat on her again. Miranda looks to men for validation of her sex appeal after her pregnancy.

Despite Charlotte being vocal about her desire to get married and have a long-term partner, the rest of the cast all get “partners” before her in Season One. (James /Samantha, Big/Carrie, Skipper/Miranda). So even as they roll their eyes and think Charlotte’s desires are naive, the reality is that by the end of the show’s run none of the women are single and both Miranda and Charlotte are both happily married. Also, let it be known that it is Charlotte, not Miranda or Carrie or Samantha, who says that all of them are soulmates. Charlotte, more than any other the other women, is a more reliable friend. (Carrie should have never asked Charlotte for money and Charlotte was not bad for not offering.)

Charlotte is not an idiot. She is “naive” but that’s not from a lack of education, it comes from being sheltered. In fact, I would argue that Samantha not getting an HIV test until it’s brought up as something by another man to be one of the dumbest things a character has ever done in the series. She also went to Smith College, which has housed many lady intellectuals across party lines.We too often put the title of “dumb one” to the most feminine in a group of women and that’s a problem and it says more about our culture’s internalized sexism than it does about Charlotte.

Now that I’ve made my rebuttals, let me talk about why Charlotte is, essentially the Sansa of Sex and the City.

For me, Charlotte in the first few seasons is a collection of all the things women are supposed to be and supposed to be ashamed of being at the exact same time. Charlotte has been told that true love is possible and that if you offer yourself as the ideal woman an ideal man will see your value  and “pick you.” Therefore Charlotte performs that dance, seeking out the “right” type of man, dating endlessly in search of that fulfillment. When Charlotte gets that man in Trey, she continues to perform. They don’t sleep together until the night before they married (which she rushes into) and then Charlotte discovers “Trey can’t get it up.” Still, he’s “perfect” so Charlotte decides to try.

This is the beginning of Charlotte’s transformation.

Through Charlotte’s marriage, she is forced to shatter the illusions of marital bliss when it comes to Trey. Trey’s Madonna-whore complex when it comes to Charlotte affects their sex life when he is unable to fully see her as a sexual being and instead masturbates to “Jugs” magazine. Their lack of intimacy is not only just a storyline about them, but about how those puritanical ideas about sex can not only backfire on women, who have their sexuality stifled, but on men who don’t know how to see women as fully realized humans with their own sexual needs.

It is in this arc that Charlotte begins to take control of her sexuality, and while she works to save the sexual aspects of her marriage, there is something else she wants: children. Which is what brings us to my favorite storyline in the series: Charlotte’s infertility.

One of the things Gabrielle Union speaks about in her memoir is how she’s had several miscarriages and treatments to try and have children that have been unsuccessful. Charlotte was one of the first times I’d seen a storyline that dealt with that issue in a caring and nuanced way. It shows her pain, her frustration and the way it can be heartbreaking to see people around you having children when you so desperately want to have one yourself.

Finally, in terms of this storyline, it has Charlotte standing up to her racist mother-in-law when she makes racist comments concerning Charlotte and Trey considering adopting a child from China. Something that hardly ever comes up in interracial adoptions.

When Charlotte meets Harry, a.k.a the best love interest in the show, he shatters her expectations about what love is supposed to look like in her life. Instead of believing that her looks and charm alone are enough, she has to learn to love without the traditional expectations, even if that is not marriage.

The Charlotte who goes through that terrible wedding in Season Six would have crumbled into a million pieces if it was Season One. Season Six Charlotte takes it in stride, because she is a woman who has learned that superficial perfection does not equal love.

When I think of Charlotte, I think of the amazing speech Cat Grant gives Kara at the end of Supergirl S2:

See, the thing that makes women strong is that we have the guts to be vulnerable. We have the ability to feel the depths of our emotion, and we know that we will walk though it to the other side.

That is how I feel about Charlotte, and that is why she has become such an important character to me. She and I are totally different people. Charlotte is a straight WASP. I’m a black first-generation queer woman. But we are similar in that we are both Pollyannas who believe in love.

One of the things I find when I talk to my friends about love is that we all find ourselves talking about how we have had to harden ourselves because “men will hurt you” and “you can’t expect anything” while also denying the fact that we do, in many ways, want companionship. It is hard, as women, to figure out how to live in that place. The place where we can cry over a break up without feeling deep shame for caring that much in the first place. The place where we can admit that for some of us, casual sex doesn’t mean as much. That place where you aren’t scared to admit you want to get married and have kids someday.

When it comes to romance and love, most of us, and women especially have been slowly taught to be afraid of it, to be overwhelmed by it, to seek it, but never to taught how to be in it. We don’t learn how to be active agents in our own happiness and to stay true to ourselves in the process.

As a wise dad said in Call Me By Your Name: “We rip out so much of ourselves to be cured of things faster than we should that we go bankrupt by the age of thirty and have less to offer each time we start with someone new. But to feel nothing so as not to feel anything – what a waste!”

But Charlotte doesn’t do that. She learns how to not compromise what it is important to her sexually and emotionally and walks out of her divorce with a sense of self-worth and value she did not have before. She fails, massively, but gets to rise up stronger and better than before. She walked through the other side and did it still believing that love was possible.

In her work All About Love bell hooks quotes a passage from Harold Kushner’s When All You’ve Ever Wanted Isn’t Enough:

“I am afraid that we may be raising a generation of young people who will grow up afraid to love, afraid to give themselves completely to another person, because they will have seen how much it hurts to take the risk of loving and have it not work out. I am afraid that they will grow up looking for intimacy without risk, for pleasure without significant emotional investment. They will forgo the possibilities of love and joy.”

hooks adds on the passage saying, “Young people are cynical about love. Ultimately, cynicism is the great mask of the disappointed and betrayed heart.”

Which is why Charlotte is my favorite character, and in my humble opinion, the best character on the show. Not because she is without flaws, but because she is flawed and is able to grow into a better person while still be true to the core of who she is. We so often think that women need pain to be strong and need to harden themselves in order to survive, but that is destructive. Charlotte is the character, who above all of the other women, who refuses to ever forgo the possbility of joy and love in her life and that, as someone who struggles with depression and anxiety, is uplifting.

That’s what makes Sex and the City such a fun and layered show for all of the many problems the show has. All the characters have to evolve beyond their stereotypes in some way and watching those journeys and watching flawed women grow into slight less-flawed realized versions of themselves is great television.