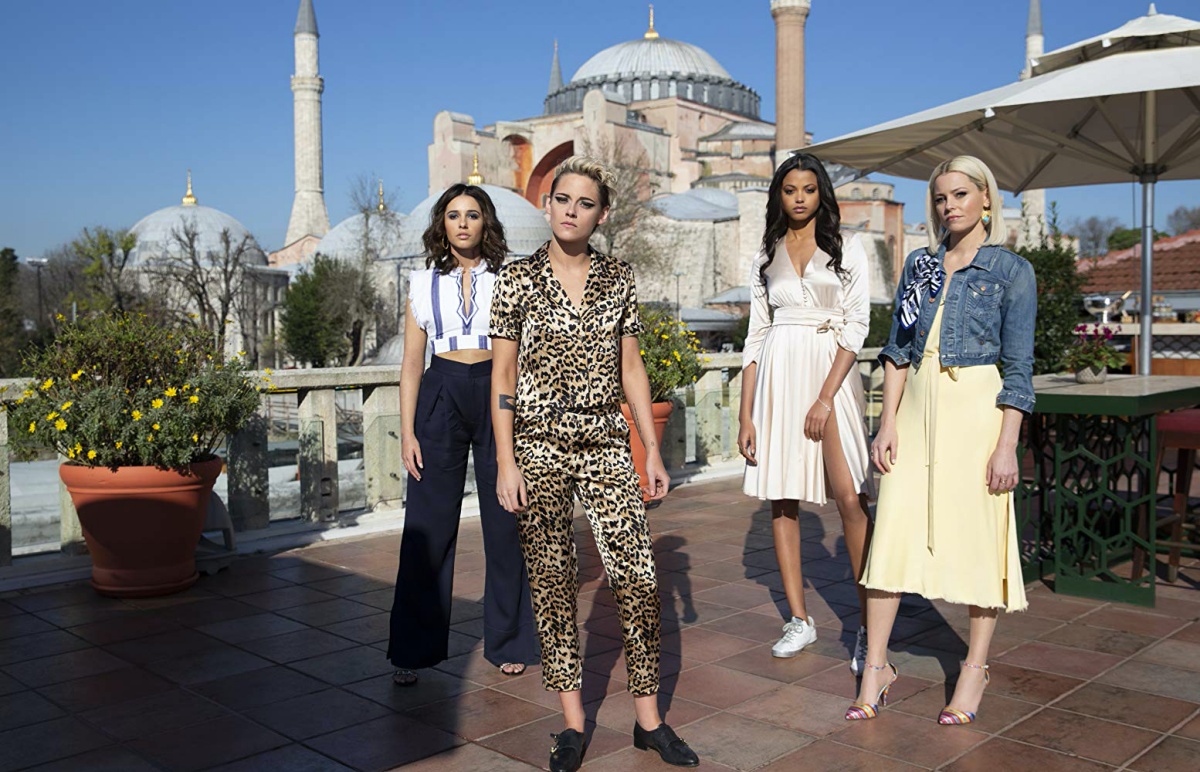 Charlie’s Angels (2019) is not a bad film. Writer/director/star Elizabeth Banks attempts to combine the crime drama of the original TV series; the comedy of the 2000s film series starring Cameron Diaz (Natalie), Lucy Liu (Alex), and Drew Barrymore (Dylan); and a little bit more modern feminism. Sadly, what she comes up with is a movie that is an enjoyable action movie, but one that doesn’t really move the needle in terms of telling us why we needed this expansion of the franchise.

The original Charlie’s Angels, which ran from 1976-1981, was created by Ivan Goff and Ben Roberts and was produced by Aaron Spelling. The three original Angels were played by Kate Jackson, Farrah Fawcett-Majors, and Jaclyn Smith, three young women who, after graduating from the Los Angeles police academy, were assigned the “woman-cop” duties of handling switchboards and directing traffic. They quit and were hired to work for the Charles Townsend Agency as private investigators, which is how they became Charlie’s Angels.

It has a mixed history when it comes how empowering it was to women. Yes, it was a hit series and depicted women in leading roles, but it was also known for its T&A, with a notable lack of bras. Fawcett once said, “When the show was number three, I figured it was our acting. When it got to be number one, I decided it could only be because none of us wears a bra.” The show was a top-ten hit in the Nielsen ratings for its first two seasons. The next few seasons, not so much. Still, there is something to be said about a show that highlighted three women, as action heroines, in a long-running, overall successful series.

When it comes to the 2000 film Charlie’s Angels, directed by McG and written by Ryan Rowe, Ed Solomon, and John August, it revamped the series to be more comedy and action-heavy. Despite the mixed critical reception, it was overwhelmingly financially successful, making $264 million worldwide on a $93 million budget. The sequel, Full Throttle, was number one at the box office for that weekend and also made a worldwide total of $259.2 million. I saw both of these movies in theaters and loved them. I saw them because my mother loved the original series, and we’ve always been big suckers for “girl power” narratives.

“Girl Power” is certainly how I would describe the 2000/2003 films. The women in the movie are effortlessly charming, and the camp element makes the fight scenes even more ridiculous. They literally bounce around like jackrabbits. It was the kind of “girl power” storytelling that was filled with sexist (and sometimes racist) tropes, but the cake around it was a bunch of women kicking ass. It feels very performative, because yes, it is effective to show women being strong and beautiful and cool, but as an adult, you realize that there is also just a lot of male gaze that makes everything a little less appealing.

Still, this was in the early 2000s, and while it hasn’t aged well, it is sort of nice to know that there was a moment pre-9/11 where studios invested nearly $100 million on a female-led action film and it did really well. Even the sequel did well, despite a larger budget.

That makes Banks’ film and its $8.6M domestic opening, $27.9M worldwide, really sad. Banks has spoken out about this failing and said those female action movies which have done well, Wonder Woman and Captain Marvel, succeeded because they are part of a “male genre,” according to IndieWire:

“They’ll go and see a comic book movie with Wonder Woman and Captain Marvel because that’s a male genre,” Banks told the Sun. “So even though those are movies about women, they put them in the context of feeding the larger comic book world, so it’s all about, yes, you’re watching a Wonder Woman movie but we’re setting up three other characters or we’re setting up ‘Justice League.’”

“By the way, I’m happy for those characters to have box office success,” Banks adds, “but we need more women’s voices supported with money because that’s the power. The power is in the money.”

Now, I’m not saying that there isn’t a correlation, but Charlie’s Angels is also very much a “male genre” franchise. It was created by men and filmed largely within the male gaze. Just because there were women on the team doesn’t inherently make it a “feminist” series. Plus, I feel like Banks didn’t understand how her film failed to target different women, mainly queer women.

Banks cast two women of color and an openly queer actress to be the leads in Charlie’s Angels, and on paper, that sounds really good—except that women of color have been longing for more diversity in terms of skin tone, so casting two lighter-skinned/mixed-race actresses isn’t groundbreaking in a Hollywood system that overwhelmingly leans that way when it comes to women of color. Kristen Stewart’s character is gay, and we get one moment of her making eyes at a woman, but we do get two full flirting sequences between Ella Balinska’s Jane Kano and Noah Centineo’s character, Langston. The first major character to get killed off is a man of color, and most jarring for me was the lack of body diversity.

To make a feminist incarnation of Charlie’s Angels, we need more body diversity, with curvy bodies and fat women getting their spaces in the beauty industry and as fashion icons. It makes no sense to me for a film that leans into wish fulfillment and fan service elements to not understand this was necessary. Even when we get a shot of a group of Angels together, none of them, at least from my watch, are full-figured women. It also doesn’t help that all of the real diversity of body type and skin tone came at the very end.

We get post-credit cameos and they manage to have Laverne Cox (great) and Ronda Rousey, who has made transphobic comments, almost back to back. Seeing that made feminism in this movie equally as performative as what we got in the 2000s. If any woman can be an Angel, then let’s see women of all shapes, sizes, complexions, and ages at the forefront.

I enjoyed a lot of aspects of 2019’s Charlie’s Angels. Kristen Stewart was a delight, Ella Balinska is someone to watch out for because was effortlessly nailing the action sequences, and Naomi Scott brought a lot of effortless charm to the role. Still, as a whole, the movie just fails to be as hard-hitting as it wants to be despite some modern updates. I wouldn’t say don’t see it, but I will say it misses the mark, and our standards for what we want for female representation are just better than they were in 2000.