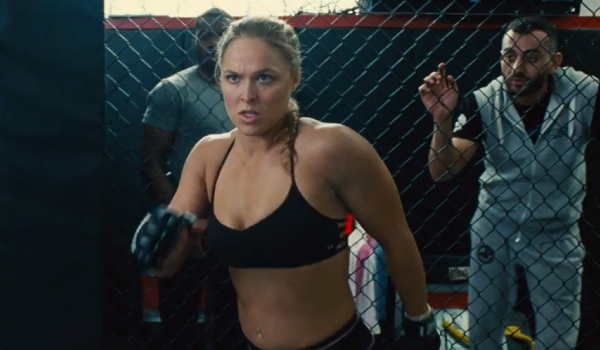 I’ve seen maybe three UFC fights in my whole life, and while they were crazy-entertaining, it never became something I followed; I’m just not a sports girl. However, when I see powerful women like former MMA fighter Gina Carano performing amazing athletic feats, then parlaying those sports careers into endorsement deals and acting roles like their male counterparts, it fills me with hope. It’s inspiring. This is how I used to feel about Ronda Rousey.

The Entourage movie was terrible, but I enjoyed seeing Rousey in a supporting role kicking the crap out of Turtle. It was one of the few bits of genuine fun in an otherwise boring film. Having heard Rousey talk about important stuff like body image was also hugely encouraging, as she’s often criticized for having a “masculine” figure, which she brushes off by saying that she’s not a “Do Nothin’ Bitch.”  One would hope that someone who challenges ideas of what “masculine” and “feminine” are would be more understanding of, if not entirely knowledgeable about, transgender athletes. For Rousey, however, this is not the case, as commenters rightfully pointed out when we posted a video of Rousey this weekend.

In an interview with the New York Post two years ago, Rousey commented on a transphobic rant made by UFC fighter Matt Mitrione about fellow female MMA fighter, Fallon Fox, who is a trans woman. Mitrione was suspended for it. Meanwhile Rousey, while admitting that Mitrione deserved the suspension and that he worded his thoughts “poorly,” then went on to defend those views, saying about Fox:

She can try hormones, chop her pecker off, but it’s still the same bone structure a man has. It’s an advantage. I don’t think it’s fair.

I understand the UFC doesn’t want to be associated with views like (Mitrione’s). I’m also glad they didn’t straight cut him.

I guess it’s good she’s using correct pronouns? *sigh* Rousey has competed against intersex athletes in Judo before, but didn’t take issue with that because “that was something they didn’t choose,” showing a fundamental ignorance about what being trans even means. Rousey continued:

It’s not something that happened to [Fox]. It was a decision she made. She should be aware in her career after that, it’s going to be an arduous path. I don’t know why she’s surprised by that. It’s going to draw a lot of emotions.

What if she became UFC champion and we had a transgender women’s champion?. It’s a very socially difficult situation.

What’s worse is that Rousey claims she came to these conclusions after “doing research.” If she’d actually done more than a cursory Google search as a part of this research, she might have come to learn that trans women undergoing hormone replacement therapy actually lose muscle mass and bone density, which means that they wouldn’t have any advantage over a cis woman in a fighting sport like MMA. Most major sports authorities, including the International Olympic Committee, the NCAA, and the Association of Boxing Commissions acknowledge this, and allow trans athletes to compete according to how they identify, so long as they are legally that gender.

If trans female athletes had so much of an advantage over cis women in competition, wouldn’t they be winning every sport in which they compete all the time? Wouldn’t cis female athletes be getting disproportionately injured all the time? That just doesn’t happen, and it’s disheartening to know that someone like Rousey, who had the potential to be a role model for all women via her sport of choice is not only operating from a place of willful ignorance, but from a place of fear – a land of scary, transmisogynist “what ifs” that have absolutely zero basis in fact.

Though her original comments were made two years ago, she has yet to clarify or amend them, and she has yet to fight Fallon Fox in competition as Fox is, as of yet, not allowed to fight in the UFC. In an awesome interview with Jezebel, Fox commented on Rousey saying:

I mean her whole thing is like, “Look at what I did. I was persistent. This is how I got women into the UFC. I didn’t take no for an answer. I never stopped, and I rose to the top, and I convinced Dana [White, UFC President] because I was persistent.” But when I’m persistent? Yeah, when I’m persistent about transgender women they’re like, “You should just stop. Just go away don’t even try to attempt it.” Now Rousey is doing the gatekeeping.

It’s sad and infuriating to watch a woman of Rousey’s stature, one who’s fought hard to get women their due in her field, turn her back on women who are not like her. Rousey is a hypocrite who flouts gender norms when it suits her, but throws women under the bus when it doesn’t. I can no longer respect her big talk about body positivity and being persistent and not being a “Do Nothin’ Bitch” when she’s unwilling to afford trans athletes that same respect. No matter how many belts she wins.