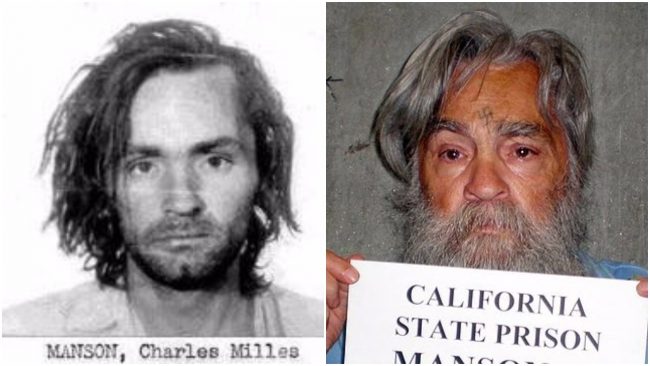 The mastermind behind the Helter Skelter murders of 1969, whose very name became “a metaphor for evil,” has died in California. He was 83.

Why am I writing about Charles Manson? Even in death, he’s still one of America’s most notorious figures, his actions representative of a dark underbelly of American racial divisions and sexual exploitation that continues to infect this country today. Those actions are also connected, inexorably, to our current cultural reckoning of harassment and assault. We are almost 50 years from the fateful two-night murder spree that Manson led his followers on in Los Angeles, yet many of its ramifications stay with us.

In 1969, Manson’s “plan” was to spark a race war in the combustible environment of the civil rights era. Per The Washington Post:

[…] the seemingly random killings were calculated to hasten the race war by making them appear committed by black militants. That, in turn, he told his followers, would stir white sentiment against African Americans, triggering widespread violence by blacks.

Manson called his philosophy of the coming post-apocalyptic race war he was certain of inciting “Helter Skelter,” whose name he borrowed from the Beatles song. After this war was in motion, Manson believed, he would rise up to and claim power in an America torn apart by racial violence. Manson became the leader of a cultlike group of what the Post calls “runaways, two-bit criminals and blindly loyal worshipers,” soon known as “the Family,” who were quickly trained in his bizarre and dangerous principles.

He exerted a particular hold on the young women in his orbit, grooming them with “a sustained toxic blend of LSD and alcohol, group sex, and his increasingly warped brand of philosophy.” Leslie Van Houten, the youngest member of the Family who was 19 in 1969, would later describe this as a method of total brainwashing and Manson’s process of achieving complete control. He dictated every aspect of their lives, from when they could eat and sleep to their sexual activity.

Manson had an unassuming beginning to his murderous aspirations. An unsuccessful singer-songwriter trying to get a foothold in the Los Angeles music scene, Manson’s artistic failure may have paved the way to the bloody spree, despite the “race war” narrative he pushed on his followers.

Investigators […] said the attacks also appeared motivated, at least in part, by Mr. Manson’s uncontrolled rage in the weeks leading up to the murders, when Hollywood agents rejected his self-proclaimed musical talents.

Whatever ultimately set off the unstable Manson, in August 1969 the “Family” killed seven Los Angelenos in what would come to be known as the “Tate-LaBianca murders.” Manson did not personally kill any of the victims (and spent subsequent years strenuously denying any involvement), but by many other accounts, his followers acted under his explicit guidance and direction.

They are most famously remembered for the brutal murder of 26-year-old actress Sharon Tate, who was married to director Roman Polanski, and was eight months pregnant at the time. One of Manson’s followers stabbed Tate 16 times, and her death has become one of the most well-known, picked-apart, and documented in American history.

We should be talking about Sharon Tate today. In death, Tate was transformed into a powerful, unwavering symbol to invoke in the cause of victims’ rights:

Because of the work her mother began and her sisters continued, victims’ voices carry a weight in the nation’s legal system and none of Manson’s minions, including Watson, have seen freedom.

[Tate’s mother] Doris Tate helped get the Victims’ Bill of Rights, which allowed for victim impact statements, passed in California in 1982. All 50 states now allow victims to speak either written or orally at certain phases of the legal process, according to the National Center for Victims of Crime.

Sharon Tate’s name and her tragic legacy still resonates in our world for another reason: less than a decade after her death, in 1977, her husband Roman Polanski pled guilty to the statutory rape of a 13-year-old girl, then fled the country before his sentencing could be passed.

A considerable amount of sympathy has been extended throughout the decades to Polanski due to his connection to Tate and her death, as though losing his wife could somehow account for sexually assaulting a 13-year-old. This is no way to remember Tate, yet she is ever mentioned in the same breath as both Manson and Polanski.

Even at the time of Polanski’s flight from justice, the media and the police were still skeptical about listening to Polanksi’s victim, and Hollywood executives and power players—all friends of Polanski—came out in support of the director. The more things change, the more they stay the same.

The decades-long push-pull of continuing to hail Polanski’s artistic skills—he won the Academy Award for Best Director for The Pianist in 2002, an event I’d like to imagine would not happen in today’s environment—and defending his assaults from behind the shield of his directorial gifts explains exactly how the Weinsteins of the world have reigned for so long. When you can admit to raping a child and still win Best Director, why would any victim in Hollywood think that their voice would be heard?

At least four more women have come forward to accuse Polanski of assaulting them when they were underage, demonstrating that this was a pattern of behavior for him and not the singular “mistake” he’s tried to pass the 1977 rape off as. And yet for years he has remained lionized. According to the NY Post:

Hollywood awarded him the Best Director Oscar in 2003, replete with standing ovations from many, including Martin Scorsese and Meryl Streep. No matter that for legal reasons — that outstanding rape sentencing — he couldn’t attend. In 2008, HBO ran a gauzy documentary on him.

When Polanski was arrested in Zurich in 2009 in a failed attempt by the US to extradite him, more than 100 celebrities signed a petition demanding his release. These included Harrison Ford, David Lynch, Tilda Swinton, Darren Aranofsky, Penelope Cruz, Wes Anderson, and — no surprise — Woody Allen. Harvey Weinstein, another signer, now also faces public allegations of decades-long sexual harassment; it remains to be seen what fallout, if any, he will suffer.

It is impossible to separate Charles Manson and Roman Polanski, two men who never met: Google one, and the other pops up. Polanksi is included in every Manson obituary I’ve read today. They are bound through Sharon Tate.

Neither deserves to be mentioned in the same breath as her.

Charles Manson is dead. Manson was no doubt a horrific monster, and he was punished accordingly. But there are still many different kinds of monsters yet in America and abroad, and many victims who have not yet been heard. May they all know justice.