Crazed, Chainsaw Wielding Robot is Viral Marketing, but for What? 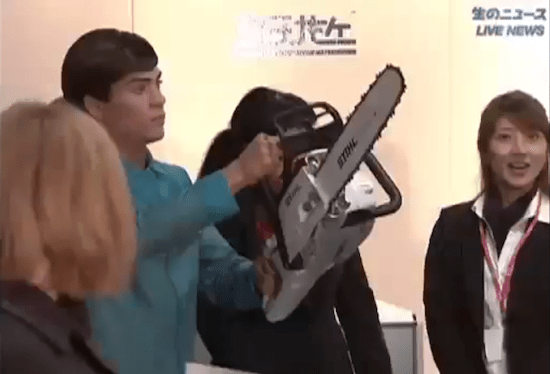 I’ve often complained about viral marketing because when advertising is indistinguishable from reality, it feels more like a trick and a cheat. However, this series of videos purporting to “reveal” a robot attacking a human crowd with a chainsaw doesn’t try to pull one over on the audience. This string of mysterious videos, each from a different perspective at the fictitious BotEx 2011 conference in Tokyo, all end the same way: An ultra life-like robot fires up a chainsaw and marches ominously toward the crowd.

Some interesting notes from the IEEE Spectrum blog, which has some clues about the origin of the video. First, though all the videos are from different accounts, they’re all followed by the YouTube account of CasparCG, a media production company. Another insightful commenter suggested that it might be related to the forthcoming remake of the robot slasher flick Chopping Mall or possibly Robocalypse. Personally, I am hoping for a remake of Westworld.

Let us know if you’ve got any leads.