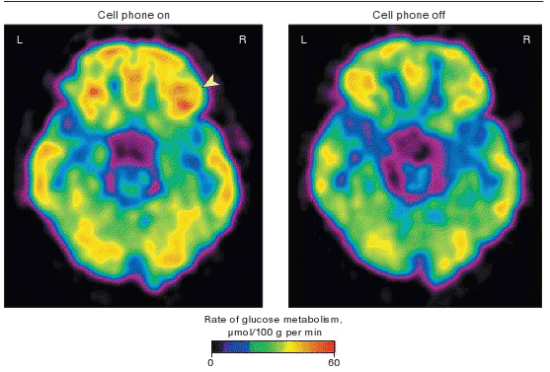 Another day, another researcher trying to determine whether your cellphone is slowly killing you. This time it’s the National Institute of Health’s neuroscientist Dr. Nora Volkow who tracked glucose consumption in the brain during prolonged periods of cellphone use.

Volkow points out that her approach attempted to be more comprehensive than previous cellphone studies by using a larger test group, 47 people, and longer rates of cellphone exposure. In her study, Volkow introduced radioactively marked glucose into the test subjects, and then observed how that glucose was used in the brain via PET scan. Her report indicates that the brain did indeed absorb more glucose on the side of the head where the phone was active, a 7% increase in one area.

Now, before you encase your phone in lead, or reject society and flee to the woods, let’s let another neuroscientist give us some perspective. Blogger Scicurious writes on the Neurotic Physiology blog, that a 7% increase is not really that significant a change.

[A 7% increase.] That’s it. That’s ALL. What can we infer from this? That the presence of an “on” cell phone increases glucose metabolism on the side of the orbitofrontal cortex where it is held. The authors hypothesize that the electrical potentials from the cell phones may be affecting things like membrane potentials in this area, possibly making it more active. It IS an affect on brain metabolic activity in that area.

What does that mean? Dang if I know, and dang if they know either. They do note that there’s an increase in brain metabolic activity, but no one has ANY idea if this could have anything to do with cancer.

Scicurious points out that the reporting on Volkow’s report has been pretty understated, avoiding any of the sensational claims of other reports. In fact, the report on Wired provides this handy comparison of Specific Absorption Rate (SAR), which is the amount of radiation absorbed by the body.

So you absorb 2.5 times less radiation on the phone than you do lying out under the sun. Maybe not so bad after all.

What it boils down to is that most people engaged in studying the effects of cellphones is doing so out of a desire to keep the public safe. Often times, new technology is introduced that does not adequately take health risks into account — take cars without seat belts, or X-ray shoe-sizing, for instance.

With the benefits of hindsight, it’s worth our time to make sure we’re not making those kind of mistakes again. But neither this study nor others can conclusively point to a connection between health risks and cellphone use. And without an overwhelming body of evidence to suggest that there is a danger, perhaps any risk is very, very slim.

Scicurious puts it best when she comments on the fears about radioactive cellphones, and poisonous water bottles:

Many of these things may indeed be of concern. Man, if technology didn’t mean a 15-20 year increase in average life expectancy and a drastic increase in perceived quality of life, what crapola it would be.

So until proven wrong, I say that we should all calm down.