CBS Actresses and Showrunners Like Halle Berry, Lucy Liu, and Anna Faris Speak Out About Sexism in Hollywood

"We don't have a sense of community because we don't get to work with each other often." - Anna Faris 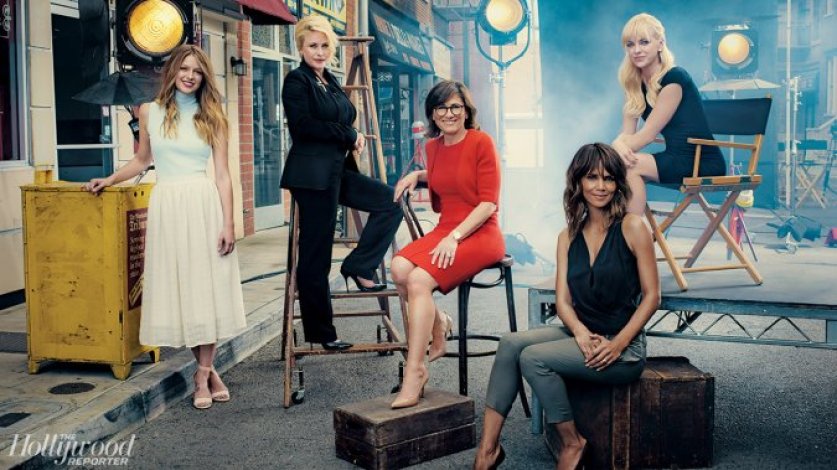 Recently, The Hollywood Reporter sat down with actresses and female showrunners of CBS shows like Mom, Elementary, and Extant to discuss their perspectives on sexism in Hollywood. Those perspectives are hugely diverse, and they are all important to improving storytelling on television.

Halle Berry, who stars on the CBS sci-fi drama Extant, discussed race, and the fight for credibility due to her model looks:

It’s a hard nut to crack, this business, but that’s for anybody. It’s not for the weak or the meek. And it was hard for me. I started almost 25 years ago. Television was different, what women could and could not do was different. And being a person of color, I was making a way out of no way. That was quite different than it is today for women of color. I also came from a modeling and beauty pageant background. And that didn’t help at all with my credibility. I had to somehow find ways to shed that persona and to let the industry know that I was to be taken seriously. I had studied [acting], I was not just a model who said, ‘Oh, now I want to act because what else do I have to do?’ It took me years to build that respect within the community.

Anna Faris, who co-stars with Allison Janney on the sitcom Mom, talked about the need for community amongst women in Hollywood, and how it’s not encouraged:

Chris [Pratt, Faris’ husband] is buddies with all these actors. They’ll do each other favors, they’ll go to each other’s table reads. And the only times I see actress acquaintances of mine is at events. We don’t have a sense of community because we don’t get to work with each other often. So I want to start a monthly brunch at my house. No agenda, just actresses hanging out and getting to know each other. Because we don’t get that. Instead it’s a feeling of being pitted against one another. And if we create a brilliant project, awesome. As women, we definitely have to generate our own work. Part of it is just the sad fact that something like one in every three to four roles [in Hollywood films] is a woman. So men have more opportunity. And you have all these women fighting for the same roles. Financially, studios can be like, ‘Well we’ll just change out this one for that one and pay her less.’ I love that these ideas are gaining momentum. What Patricia Arquette said [at the Oscars] was just jaw-dropping. I was so thrilled to talk to her at [The Hollywood Reporter] photo shoot. I just wanted to give her a big bear hug and be like, ‘Let’s do this, let’s make some money!’

Lucy Liu, who plays Joan Watson on Elementary, talks the importance of making the jump to directing:

Before we even signed, my manager [Maryellen Mulcahy at Framework Entertainment] went to [Elementary producer CBS Studios] and said, ‘Hey, she’d be interested in [directing] at some point.’ And then when we signed on, we said we’d love to [direct an episode in] this first season. And they’re like, pass. Like it’s a game show: pass. (Laughs.) And the second season she went back again. And they said no. So we had a 22-episode pick up [for season two] and then they added two more episodes. And she went back again. And they had to acquiesce at that point. Now when I say acquiesce, I mean that they enjoy working with me as far as I know. They really have been incredibly encouraging and they were happy to [let me] do it. And oftentimes that’s not the case. I’m sure they were nervous. I mean who knows what you’re going to get? But they were very enthusiastic about the result and then offered me, without us asking, an episode [to direct] for [season three] and one for next season. So that makes me feel like I’ve done something right.

Erica Messer, Executive Producer on Criminal Minds, talks about how often women’s stories are dismissed, even when they’d make compelling television, when they don’t fit certain stereotypes and paradigms:

We hadn’t done a Susan Smith story [who is one of the real-life criminals featured in the show’s opening credits sequence]. And so I did some research, and [found] a very similar horrendous story where the mother is obviously the guilty one: She said that somebody pulled her car over, shot everyone in the car, including her. But of course she had a wound in her leg or something. And then she pulls up to the emergency room with her children shot in the car, and three of the four were dead and the other one she obviously thought was dead. They do surgery on the little boy, and when he wakes up from surgery they take the mom in and he starts freaking out. He’s hysterical. He was maybe 3 years old, and they got it out of him that mommy is the one who shot everyone. It’s a real story! I thought, ‘Oh my God, this is crazier than anything any of us would ever dream up. And when I brought it up in the writers room everyone was like, ‘We can’t do that.’ And I was like, ‘I know.’ And I’ve never looked again.

Liz Kruger, Executive Producer on Extant, illustrates one of many reasons why it’s important to have a female presence in all areas of entertainment:

One of the things that’s really important to me and that I stress in the writers room, even with men, is ‘family first.’ If somebody says, ‘I need to go to my kids’ school in the afternoon,’ I am 100 percent, just go, don’t even ask. I feel that is one of my responsibilities as a boss. Yes, it’s work. And we love our work and it’s important. But at the end of the day, your family is what matters. [Being a mother] gives you perspective and hopefully it makes for kinder, gentler bosses who really have the big picture. Thirty years ago when there were all male bosses, it was so skewed. I can’t imagine what it was like to be a woman in the workplace. There was no room to be a human being with a family in those workplaces.

Check out more tidbits like this from the women at CBS at the link above. I’ve gotta say, CBS has become an amazing example to follow with regard for diversity and gender parity in entertainment! With Nina Tassler at the helm, half of her senior executives are female as are a third of her showrunners, and that’s growing. The more women keep speaking up, asserting themselves, and working together, the better those numbers will become!