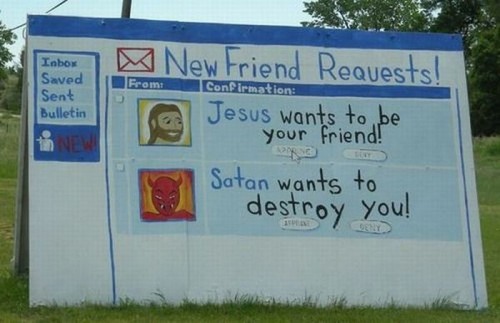 In the face of dwindling numbers of French priests and an international child abuse scandal that many feel has not been addressed strongly enough by the Vatican, the Catholic Church in France has created a Facebook page as a part of a two-week marketing campaign to “to attract young people to the priesthood.”

Maybe they should also spend some time preventing the opposite!  Hey-oo –

Er, sorry.  We’ll try to keep those sorts of things to a minimum.

The euro250,000 campaign was launched nationwide on April 20 and will last through May 5. Seventy-thousand postcards depicting a Catholic priest’s outfit with a button reading “Jesus is my Boss,” pinned to the lapel and the slogan “Why not?” written underneath will be distributed to 600 points throughout France, including restaurants, bars and movie theaters. A Facebook page created April 21 garnered over 1,200 fans within one week.

“Why not?” is the slogan?  Yet another example of why the Catholic Church really needs better PR people.  Hey-oo –

While 41.6 million French citizens consider themselves Catholic, only about 2 million attend church every week.  France has had its share of abuse claims, but less than the US, Ireland, and Germany (which, of course, only really means that less abuse has been reported, not necessarily committed).  The number of ordainments in Europe and America is decreasing, but global ordainment is increasing, thanks to diocese in Asia and Africa.

It’s common to see an Italian congregation straining to understand the Sunday sermon because it’s delivered in heavily accented Italian by young clerics from Brazil, Mozambique, the Philippines and other countries

A career with the church has historically been a place for people (second sons, unmarriageable or clever daughters) to gain respectable employment aiding the community and a good education.  In most developed countries, there are plenty of ways to obtain both of these things without sacrificing sex, marriage, children, and a chance to make an above average wage.  This is less frequently the case in the Third World.

Guillaume Humblot, the 31 year old church-going editorial assistant featured in The Guardian’s article who himself is concerned about the dwindling French priesthood, says:

I already have a professional life… I’m already settled in my life. I have hobbies, I like to see my friends. It’s not easy to completely change your life like this.

And so the slogan “Why not?” sums up the basic problem of the ad campaign.  If the Church really can’t see the many, many reasons why your average young man wouldn’t want to become a priest (even aside from the priesthood’s current reputation), well, that’s probably very close to the reason why they don’t have many young priests right now.  They need to provide clear and concrete reasons why a man like Humblot would want to be ordained.