Return to Silas! The Carmilla Movie Trailer | The Mary Sue

Gotta Get Back to Silas! Silas!: The Carmilla Movie Trailer Is Here and It’s Everything

If you listen very closely you can hear the ecstatic screams of queer girls all over the world.

Seriously though, Carmilla being back in our eye-holes is a cause for celebration. Not only because it is good (and it is very-very good), but it stands as a reminder that queer narratives can be fun, angsty, supernatural, inclusive and not end in pain. In the television season that can not be forgotten (2015-2016), we saw the deaths of Lexa, Tamsin and over thirty queer women in television. Thankfully, Carmilla let us see two women ride off into the sunset together and is returning to give us more thrills and chills. This time as a movie!

According to the promotional material we are looking at an epic time jump:

It has been five years since Laura (Bauman) and Carmilla (Negovanlis) vanquished the apocalypse and Carmilla became a bonafide mortal human. They have settled into a cozy apartment in downtown Toronto; Laura continues to hone her journalism skills while Carmilla adjusts to a non-vampire lifestyle. Their domestic bliss is suddenly ruptured when Carmilla begins to show signs of “re-vamping” – from a fondness for bloody treats to accidental biting – while Laura has started having bizarre, ghostly dreams. The couple must now enlist their old friends from Silas University to uncover the unknown supernatural threat and save humanity – including Carmilla’s.

In addition to Carmilla, Laura and the original gang of misfits, we get the return of a familiar name. Remember Ell, Carmilla’s former love? Well she is back and being played by Wynonna Earp’s Dominique Provost-Chalkley (sporting her natural accent) in a potential cross-over story I now really want. While the cast and writers have denied there will be any love triangle (praise Hera), it is still promising to be a movie filled with romantic tension and the character depth we have gotten used to from Carmilla. 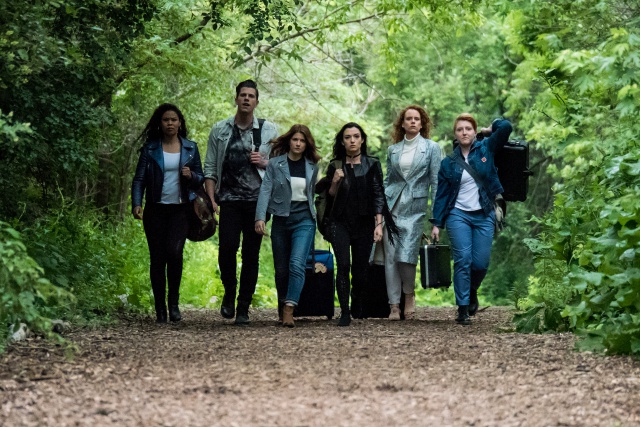 If you want to see the movie in theaters, Shaftesbury and Cineplex Events are going to have screenings in 30 cities across Canada, October 26 with exclusive footage that will not be available on the streamed version of the film. Tickets for the event are available at the Cineplex site. Those of us unable to go to Canada will still be able to watch the film, fans who pre-ordered The Carmilla Movie on VHX will be able to watch the film immediately on the platform beginning October 26. October 27, fans can also catch the movie on Fullscreen.

So mark your calendars and prepare your bodies to be reawakened. Personally speaking, I am hoping for Maddie cameo.