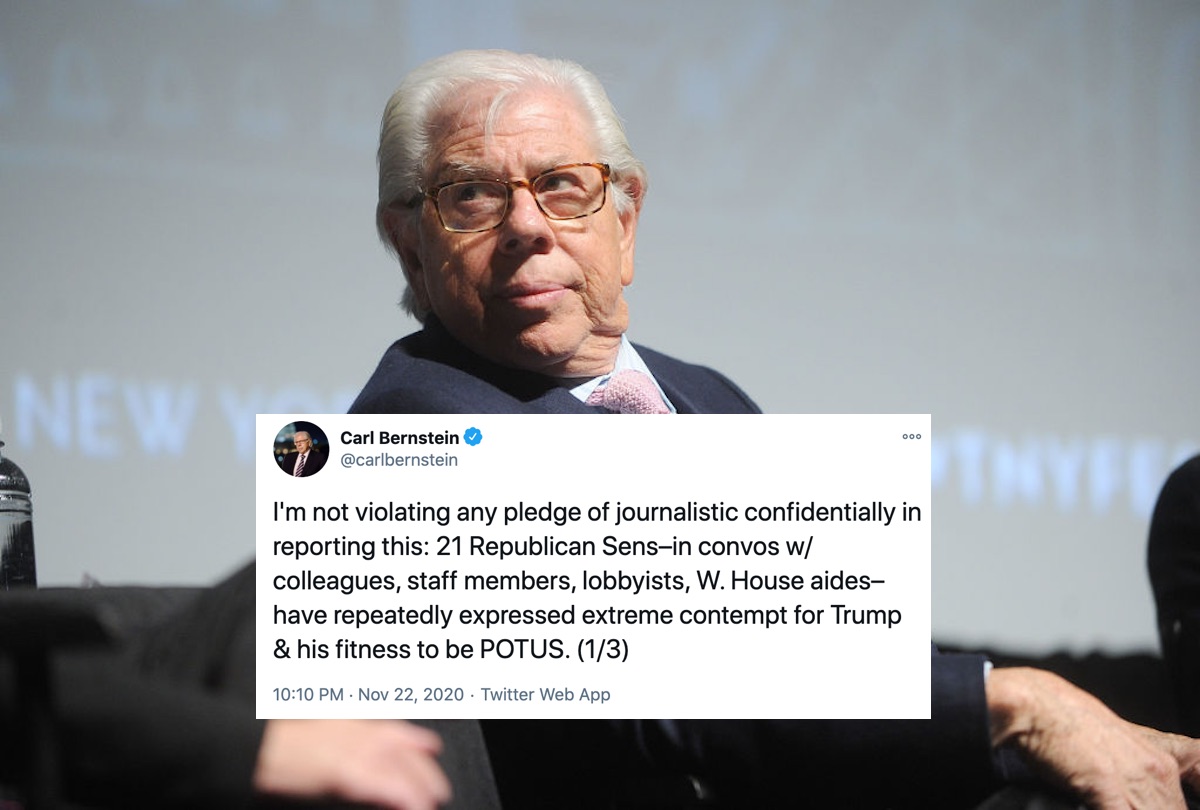 Legendary journalist Carl Bernstein tweeted out the names of 21 Republican Senators, saying that each has “repeatedly expressed extreme contempt for Trump & his fitness to be POTUS” in private conversations.

Bernstein is not naming names as a means to laud any of these GOPers for acknowledging behind closed doors that Trump is a nightmare. Instead, he writes, “With few exceptions, their craven public silence has helped enable Trump’s most grievous conduct—including undermining and discrediting the US the electoral system.”

With few exceptions, their craven public silence has helped enable Trump’s most grievous conduct—including undermining and discrediting the US the electoral system.

The Senators named should be called out for the rest of their careers and indeed the rest of their lives as to why they publicly supported a President that they know is a threat to our democracy. (Most of them continue to twiddle their thumbs, as Trump launches an unprecedented attack on America’s electoral integrity and attempts an idiotic coup in real-time). It would have taken only a handful of these Senators to vote with Democrats and see Trump formally impeached for abuse of power and obstruction of Congress back in the long, long ago of January 2020. (A singular GOP Senator, Mitt Romney, voted for conviction on Article I, abuse of power, along with Democrats.)

Instead, they toed a cowardly party line, and the next month Trump’s catastrophic handling of the pandemic came to bear. More than 250,000 Americans are dead from COVID-19, and many more will die or face life-long consequences. History will ultimately excoriate the Trump administration’s staggering mismanagement and crass politicization of the virus and mask-wearing. But these 21 Senators deserve to be right there beside him and their Senate GOP fellows, because they had the power over the last few years to see Trump taken to account, and they did nothing.

Hey look. Based on Carl Bernstein’s reporting it looks like we DID have enough Senators to convict Trump in the impeachment trial.

As for Bernstein, the Internet was quick to point out the difference in his approach to Trump and his enablers versus his All the President’s Men and old Washington Post colleague Bob Woodward. Woodward was called to task in recent months for not revealing several damning points of fact about Trump’s behavior regarding the pandemic until the publicity ramp-up for his book Rage.

Woodward: I’ll sit on the fact that the president knew the virus was airborne in February for nine months to sell a book.

Bernstein: I’ll burn 21 sources in a single tweet because they fucked around and found out. https://t.co/eb3YRJ1IxP

The Virgin Bob Woodward vs. the Chad Carl Bernstein

It has always been the case but Bernstein > Woodward.

As much as these 21 names should be set down in the historical record for hypocrisy and damaging the nation for their own political ends, all the more damning are the GOP Senators and Congressmen who have never spoken out against Trump even in private conversations. Their willful complicity and apparent delight in enabling a man bent on destroying American democracy should be their only epitaph. Or perhaps it should be from John Stuart Mill in 1867: “Bad men need nothing more to compass their ends, than that good men should look on and do nothing.”

Good night to Carl Bernstein and ONLY Carl Bernstein, preferably the one who gave his last fuck yesterday. pic.twitter.com/3H2cZ5KYQp