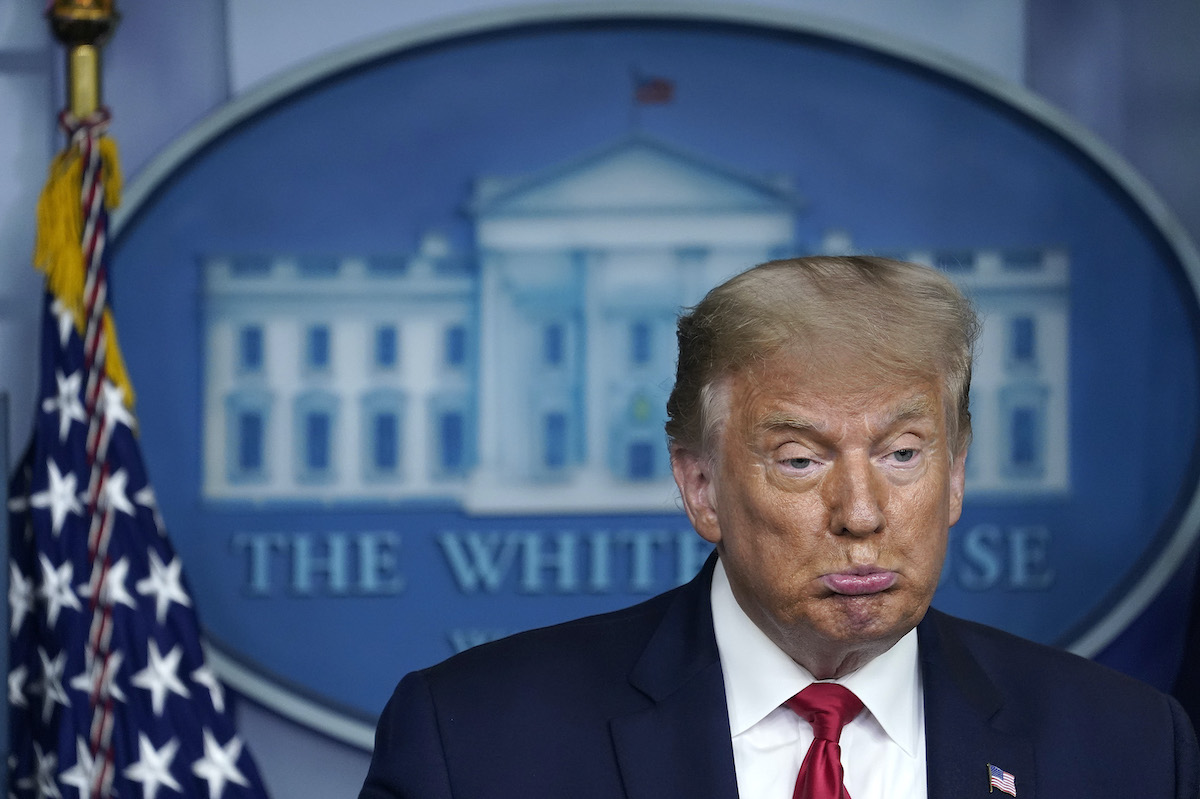 When Bob Woodward shared some revelations from a series of interviews he did with Donald Trump earlier this year, people were angry. Much of the anger was directed at Trump, obviously, who can be heard in recordings talking about how deadly the coronavirus is at a time when he was downplaying its threat to the public, comparing it to the flu and calling it a hoax being pushed by the Democratic Party for political gain. He told Woodward that he was downplaying the virus knowingly and deliberately because he didn’t want to “create a panic,” choosing instead to gaslight a country while hundreds of thousands of people died.

So of course people were angry with Trump. But people were also angry with Woodward for keeping these interviews to himself, only releasing them six and more months later in the lead-up to his book release.

Now Woodward is trying to defend his decision to sit on this information so long. The AP writes:

“He tells me this, and I’m thinking, ‘Wow, that’s interesting, but is it true?’ Trump says things that don’t check out, right?” Woodward told the AP during a telephone interview. Using a famous phrase from the Watergate era, when Woodward’s reporting for the Post helped lead to President Richard Nixon’s resignation, Woodward said his mission was to determine, “What did he know and when did he know it?”

It’s totally understandable for Woodward not to rush out and hastily publish this story before he knows what’s what. But the more he tries to explain why he waited so long, the more callous and calculating he ends up sounding.

“If I had done the story at that time about what he knew in February, that’s not telling us anything we didn’t know,” Woodward said. At that point, he said, the issue was no longer one of public health but of politics. His priority became getting the story out before the election in November.

“That was the demarcation line for me,” he said. “Had I decided that my book was coming out on Christmas, the end of this year, that would have been unthinkable.”

So he wanted to influence the election but has nothing to say about the nearly 200,000 people who have died between that interview and this week when he released the audio as promotion for his book?

Some are defending Woodward, saying it wouldn’t have made any difference if he’d shared what Trump told him earlier. And maybe that’s true. But we don’t know that, and it seems like a journalist has an ethical obligation to share something like this with the public. Also, who does it help to be so complacent about Trump’s actions and the reactions of his base?

There is no ethical or moral defense of Woodward’s decision to not publish these tapes as soon as they were made. If there was any chance it could save a single life, he was obligated to do so. Bob Woodward put making money over his moral and professional duty.

This is the same shit people were telling me about Bob Woodward. “It wouldn’t have mattered if he said anything.” You don’t know that. Why are you defending these people. They don’t care about you. Stop it https://t.co/IE0rBPR0QA

Like, as a young Woodward got information, he published it, as fast as it was coming in, and brought a horrifying scandal to light in front of a critical nation, eventually forcing the President to resign in shame and disgrace.

Which turns out to be great for book sales.

Earlier today he tweeted: “Bob Woodward had my quotes for many months. If he thought they were so bad or dangerous, why didn’t he immediately report them in an effort to save lives? Didn’t he have an obligation to do so? No, because he knew they were good and proper answers. Calm, no panic!”

Bob Woodward had my quotes for many months. If he thought they were so bad or dangerous, why didn’t he immediately report them in an effort to save lives? Didn’t he have an obligation to do so? No, because he knew they were good and proper answers. Calm, no panic!

Then at a press conference this afternoon, he said the Woodward revelation was “stuff that everyone knew,” which it was not. “If Bob Woodward thought what I said was bad, then he should have immediately, right after I said it, gone out to the authorities so they can prepare and let them know.”

But which authorities is he talking about exactly? Isn’t Trump the authority here? Or maybe the team that briefed Trump on the dangers of the virus, whom he then ignored? Who is Trump suggesting Woodward should have gone to with this information?

In this quote he 1) blames Bob Woodward for not making a public health announcement; 2) says the “fake media” knew it was bad, but somehow Woodward didn’t (he’s not part of the media?); then says 3) he did the interview only because he wanted to see if Woodward can “write good.” https://t.co/TB9inlU4gZ

Trump trying to pin him lying on Woodward, like: if it was so bad, why didn’t he report. Which is a trap that Woodward didn’t need to walk into.

Trump then blamed Bob Woodward for not telling people that he lied earlier. https://t.co/ZZRSVqi4Rp

After defending intentionally downplaying the coronavirus threat, blaming Bob Woodward and listing off the extensive amount of television he watched last night, President Trump leaves the briefing room after only taking three questions.

Every single part of this whole story is awful.