Cards Against Humanity Is Canceled | The Mary Sue

Cards Against Humanity Is Canceled and That’s for the Best 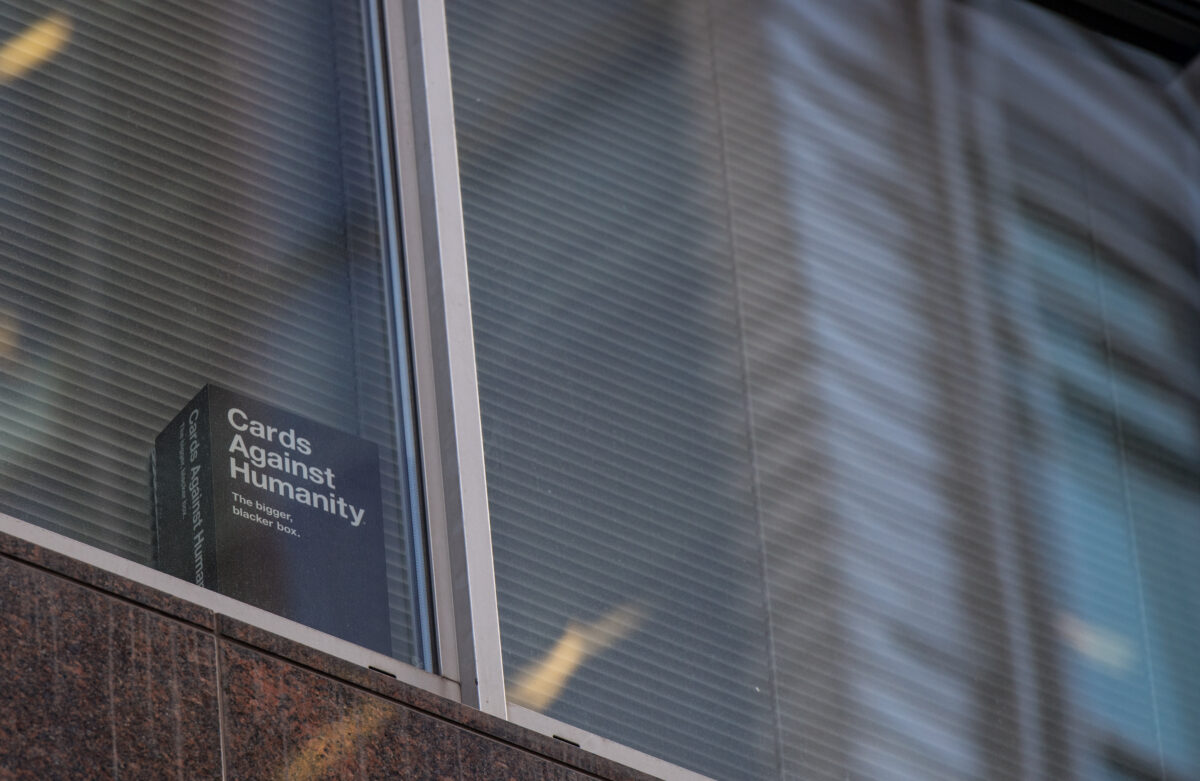 It really shouldn’t be surprising that the makers of a “Card Game For Horrible People” are … horrible people. The current movement for racial justice has exposed the toxic culture of the company and re-exposed the abusive behaviors of one of the creators of the most popular millennial party game—and it hints at a much bigger problem with our society and our humor.

Cards Against Humanity gained a huge foothold and became popular because it’s shocking and often crass. And that shock has included cards that made light of racism and rape, fetishized bodies, and demeaned women and minorities. Many of those offensive cards have been removed as the game has evolved, but not all of them, and it’s still a game that is all about being a horrible person. It’s the “joke” of ironic sexism and racism and more that underlies the humor … but it turns out the racism and sexism and horribleness at the company were not ironic.

Polygon released a report last week that detailed the sexist, racist, and generally awful workplace culture in the Chicago office of Cards Against Humanity. Cards Against Humanity was run and is still owned by the eight original creators of the game, who are all white dudes. But at the center of many of the problems at the company seems to have been one founder in particular: Max Temkin.

Temkin is alleged to have been a mercurial and abusive boss, who might harass, berate, or even fire employees if they upset him. There was no HR at the company to complain to, which became a running joke. And one of the verboten topics that the company never addressed and which could not be mentioned for fear of invoking Temkin’s wrath was an alleged incident of sexual assault committed by Temkin which came to light in 2014.

And internet user known as “Magz” (who has understandably kept her identity secret for fear of harassment) alleged that Temkin was her “rapist” but the allegations never gained traction. This was in part because Temkim denied the allegations, and probably because, in 2014, no one wanted to acknowledge that a game that originally contained rape joke (which have since been removed) night have been made in part by a rapist.

But things are different now. We’re in a post-MeToo era, and amid a new wave of sexual harassment reckonings alongside an even larger wave of calls for racial justice. On June 6, former CAH employee Theresa Stewart shared a thread regarding the racist culture at the company and how she as the first Black, queer woman at the company was treated.

Now that there is great traction for the #secondcityisover party, I want us to turn our focus to another beloved Chicago institution #cardsagainsthumanity. As their first black/queer black woman employee, I’d love to share my experience of working there. #cahisover (1/?) pic.twitter.com/lFf0Xu1bED

This was the latest pebble that began an avalanche. Noted feminist critic Anita Sarkeesian ended her association with the company and Temkin. The same allegations from 2014 gained new scrutiny, and in the Polygon piece, Magz shared the details of her assault at Temkin’s hands. (Content warning for the following paragraph: Sexual assault.)

In the alleged incident, Temkin performed oral sex on Magz after she had passed out in his dorm room, while she was a freshman in college and he was a sophomore. Magz told Polygon: “I definitely told him to stop multiple times … But I had a freeze reaction. I was frozen. I couldn’t move. When it finally finished, he had the gall to ask me if I came.”

The horror doesn’t end. Following the Polygon expose, another former employee, Nicolas Carter, posted an essay to Medium detailing how after he raised concerns about the game and founders of the company using the N-word and making racist jokes, he was involuntarily committed to a psych ward for five days thanks in part to co-workers raising concerns.

Please read that again. After Carter, who was the only Black man at the company at the time, voiced valid concerns about the founders wanting to put the N-word into the game and expressed other objections to planned expansion, he faced retaliation that ended with him committed by his family with help from the husband of the head writer. Temkin was part of this. But not the only one involved.

(Note: this has been edited to reflect that CAH the company did not pursue Carter’s commitment, but employees and family of employees were involved.

Carter also told the Mary Sue in response the CAH denial of this: “People can make their own decision what happened, But I welcome them responding to the piece I actually wrote rather than tweets about it.)

As of June 9, Temkin has stepped down from the company and will no longer be actively involved in the game. But that’s not enough. We have to truly examine what sort of place a game like this really deserves in our culture and what it says on a larger scale about what we’re willing to accept as “funny.”

In the past, I enjoyed playing CAH, and now I’m questioning what that says about me and everyone else that’s made it such a staple. We’re at a point in our culture where offensiveness and horribly dark humor is commonplace. For over 2o years shows like South Park have chipped away at what’s “okay” to laugh at. Emily VanDerWerf of Vox recently wrote about how the musical Avenue Q embraced the idea of ironic bigotry. For our entire generation, racism, misogyny, rape, violence, and more have been turned into jokes. Cards Against Humanity, where we make a game of being as awful as possible, is just one facet of that.

Despite the admitted horribleness of CAH as a game, as a company they have done a lot in recent years to raise money and awareness for important progressive causes. They bought land to ostensibly obstruct Trump’s border wall, raised awareness of the “pink tax” on items for women, and contributed money elsewhere to worthy causes. As noted in the Polygon piece, this activism seems like a case of protesting too much and attempting to undo some of the harm the founders and leaders of the company know they, and their game, have done.

Cards Against Humanity is just one of many cultural touchstones in the past 20 years that have tried to make racism and sexism funny. They have, to use a snobbish term, lowered the tone of the culture. That’s not necessarily bad on its own—not all crude humor is indicative of society’s failings—but it’s a stepping stone towards truly bad things. Even after removing racist and rape joke cards from the game, those jokes are still out there and CAH exists as an excuse to literally be horrible. And when people are given that excuse they might also think it’s okay to send rape and death threats to journalists, to call people the N-word, to enjoy sexy art of a fan-created Nazi My Little Pony (Yes. This is real.)

Ironic racism is a facet of white supremacy. Rape jokes perpetuate rape culture. These things shouldn’t be funny. We shouldn’t be desensitized to them. These systems of oppression and violence are not a game, and maybe now that we are learning that the people that made them into a game are indeed the horrible people they advertised themselves as … maybe we’ll finally arrive at the mutual understanding that some things just aren’t funny.