Review: "The Last Jedi" Is Beautiful, Overstuffed, Action-Packed, and It Will Make You Cry | The Mary Sue

Review: The Last Jedi Is Beautiful, Overstuffed, Action-Packed, and It Will Make You Cry 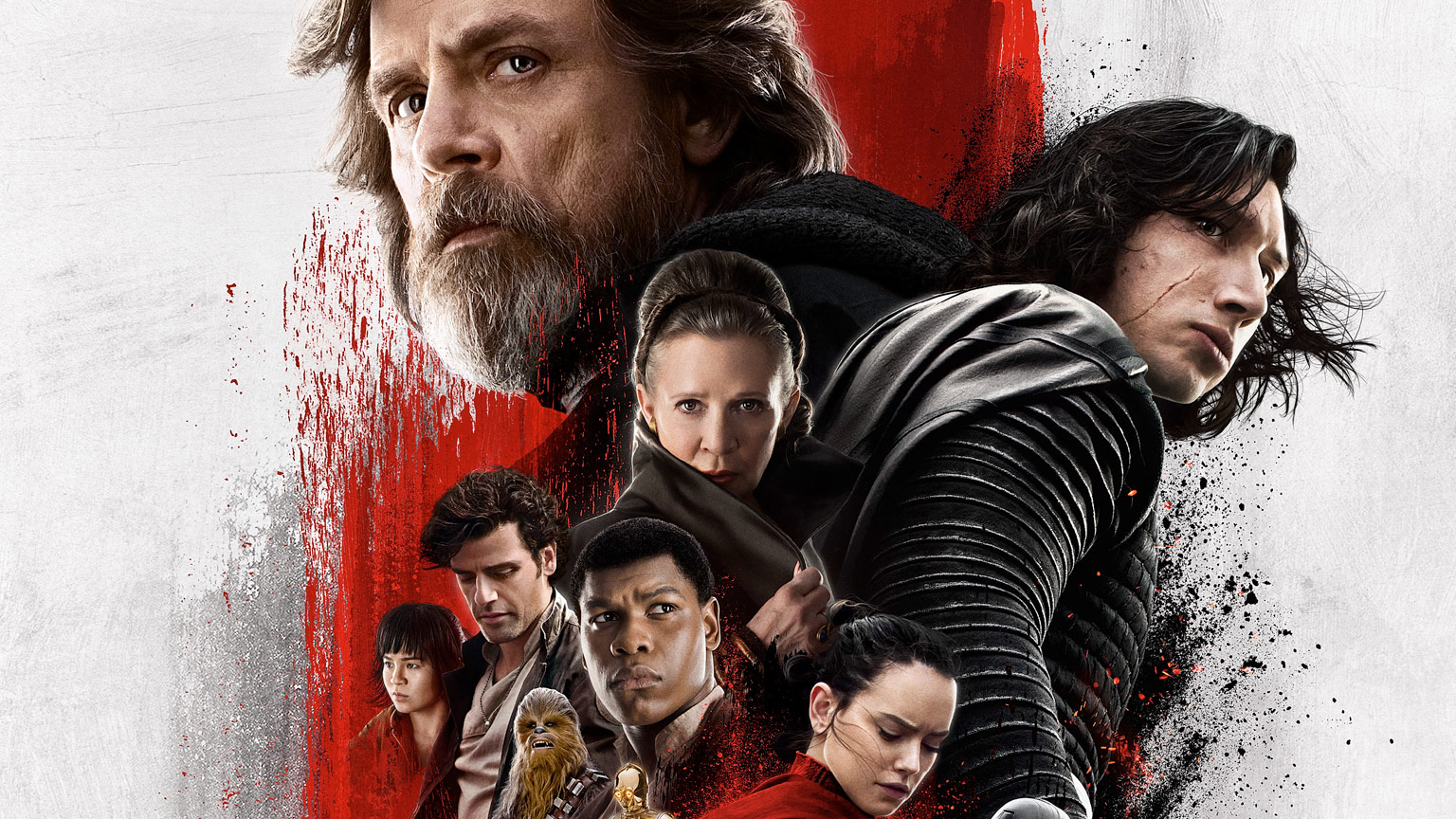 It’s hard to know where to start reviewing The Last Jedi, because so much happens in this movie that I have whiplash. But I’m happy about it. The Mary Sue’s spoiler-free review, ahead.

Clocking in at two and a half hours, The Last Jedi is the longest Star Wars yet, a length that is both a blessing and a curse. You’re never bored, but there’s so much material covered here that The Last Jedi easily could have been two movies, and there’s so many final standoffs and climactic scenes by its close that it feels like at least four or five movies’ worth of conclusions.

By the end, you will probably feel as exhausted and exhilarated as I do now, having been through so much; like me, you may cry openly during at least three parts of this film.

The Last Jedi picks up where The Force Awakens left off without missing a beat—hardly any time has passed. Impetuous flyboy Poe Dameron (Oscar Isaac) and General Leia Organa (Carrie Fisher), who needs no introduction, are our windows into the struggling Resistance; ex-Stormtrooper Finn (John Boyega) was injured in TFA but soon rejoins the action, with the wonderful Rose (Kelly Marie Tran), a Resistance engineer, at his side. Tran’s Rose is every bit the breakout that she’s being touted as, and I can’t wait for a new generation to love her as she deserves.

Over on the Dark Side of things, Supreme Leader Snoke (Andy Serkis) has plans to swing the fight and the balance of the Force in his favor, assisted by the oft-sneering General Hux (Dohmnall Gleeson) and of course the former Ben Solo, Kylo Ren (Adam Driver), whose loyalties are called into question. Meanwhile, amateur Force user Rey (Daisy Ridley) has found Luke Skywalker (Mark Hamill), and the film picks them right back up at the last minutes of TFA, with Rey beseechingly presenting Luke his lightsaber. New big-name additions to the cast include Laura Dern as an unconventional Resistance Admiral and Benicio Del Toro as … well, it’s best to let you wait and see. Let’s just say he definitely Benicio Del Toros it.

If even just typing out all of those characters takes two paragraphs, imagine how many we’d need to describe what they all get up to. I’m keeping this as spoiler-free as possible, but if I were to meet you at a bar right now and attempt to explain the entire plot of this film, we’d be there for hours. Thankfully, it successfully hits the beats that we want and hope for from a Star Wars film, even if that means we get a whole lot of beats.

There is intergenerational family drama, defined by deep love and deeper betrayals. There are Force-use training montages. There are adorable and sympathetic alien creatures that feature importantly into the plot (a lot of creatures). There are great friendships and also ever-shifting allegiances. There are sparks of romance. There are twenty movies’ worth of twists and last-minute interventions that turn the tide. And there is a fantastic amount of incredible space jewelry, likely thanks to the late Carrie Fisher, to whom the film is dedicated. 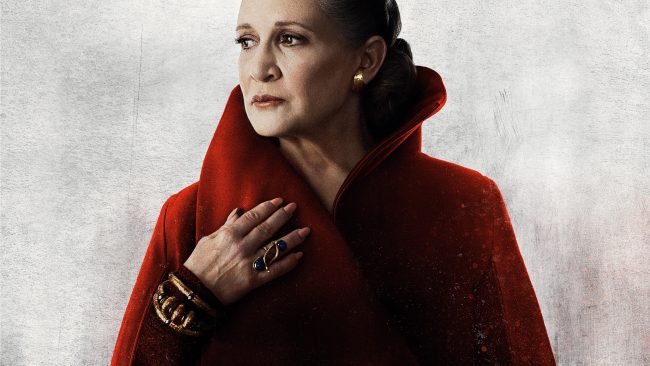 Let’s take a moment to talk about Fisher. She is luminous here. Every time she’s on screen, it’s impossible to look away, and she is as tough, loving, and wily as we would ever want our Leia to be. We drink her scenes in, uncertain if we’ll see her in Star Wars again. Her part is quite central, and it’s impossible to imagine this universe without her. She is responsible for at least 3/4 of the tears trickling down my face during this movie. She, and Leia, are the shining light in The Last Jedi that all characters who dream of defeating the Dark Side look to for guidance.

In fact, it is women who are the leaders at the heart of the Resistance. I have never seen more women occupy important roles in a Star Wars movie, and the screen is also often full of wonderfully diverse faces serving both sides of the Force. Woefully underused, however, is Gwendoline Christie’s shiny, nefarious Captain Phasma, for no reason that I can possibly discern. Otherwise, this is rather a tour de force for the ladies, with Leia, Rey, Rose, Dern’s Admiral Holdo, and even a cameo from Lupita Nyong’o’s Maz Kanata all vital to the proceedings. Fisher’s daughter Billie Lourd is also back on board as a Resistance Lieutenant who helps out Poe, and no, I’m not crying anymore, you are.

Any real problems in The Last Jedi stem from the fact that there’s just so much going on that it’s hard to stay invested in every subplot. There are also decisions and plans made at breakneck speed that seem crucial at the time and end up not seeming to matter at all; examining the film’s logic under a microscope would not return beneficial results. But we’re not here for logic. We’re here for highly emotional epic drama in space, and herein the film delivers. Surprisingly, the most compelling relationship to emerge is not between Luke and Rey, or Finn and Rose (though I adore them), or Poe and Leia: it is Rey and Kylo Ren’s interactions that rule this movie, and they are the axis upon which everything else turns.

How you feel about those interactions could largely determine how you feel about The Last Jedi. The first half of the movie moves at a slower pace, with a lot of time given to Rey’s self-exploration and her attempts to engage Luke on his distant island (yes, this is the island of the porgs). Meanwhile, what feels too much like the “B plot” side adventure has Finn and Rose on a mission that takes them into another film entirely, a sort of intergalactic James Bond-meets-Free Willy. It’s hard not to feel that their entire subplot could be axed in order to make The Last Jedi stronger and tighter, which is unfortunate. Luckily, both Finn and Rose get to shine in the latter half, when things really pick up, and then move so fast that you’re left quite dizzy and mostly dazzled.

Visually The Last Jedi is absolutely stunning, and it’s not hard to see why Disney and Lucasfilm are trusting director/writer Rian Johnson with the keys to the Star Wars kingdom going forward. The sets and settings are always evocative and impeccable, as is the costuming; the musical scores we’ve come to love swell at exactly the right moments; the special effects are seamless and convincing.

The only thing that Johnson might need is a bit of reining in: he’s full of so many good ideas and such obvious love for this universe that sometimes he gets carried away, and he has filled this movie to the very brim. But I’ll take that kind of oversaturation any day over the bloodlessness that marked the prequels. No one can accuse The Last Jedi of not having heart. While I expected to be sad at the sight of Fisher, I did not expect to spend whole parts of the screening trying unsuccessfully not to cry. I am not a movie crier, but there you have it.

Ultimately, despite all its bold colors, winning performances, and many moving parts, the movie belongs to Fisher, who is resplendent; Hamill, who plays an altered Luke, weathered by storms, with conviction; and Driver, whose flat delivery can shift into vulnerability or rage when you least expect it. In the end, it’s the oldest Star Wars lesson: you can’t keep those Skywalkers down.