The Captain America Movie Costume In Words Only 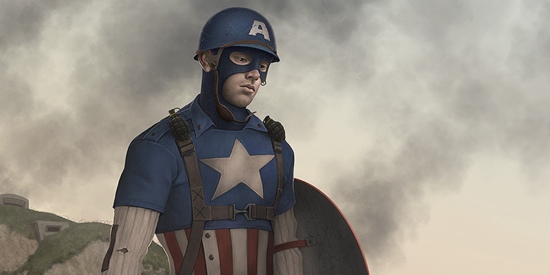 There is a distinct progression in fan attention when a new superhero movie comes out.  First it’s the writer and director, then the casting of the main lead, the casting of the villain, and, eventually, somewhere down the line, we get a look at the costume.

Normally, we wouldn’t get too excited until some pictorial evidence was offered for the internet to excrete masonry over, but JoBlo‘s incredibly detailed description of “one of the approved costume tests” for the new Captain America movie has got us interested.

On his chest still lies the white star though it’s not as prominent as the comic version. The costume is still split horizontally through the middle with blue on top and red and white stripes on the bottom. But instead of stripes, it’s actually just a white base with two red utility straps acting as stripes.

As you might expect, there’s no codpiece to be found and Cap is wearing blue pants tucked into brown utility boots. The pants aren’t skin tight but they aren’t baggy either. And for those who are curious, the pants actually have a fly so Cap can take a leak if he needs to.

As for the shield, it actually hews very closely to the classic design of red/white/red rings with the white star in a blue circle at the middle.

I guess while a picture is worth a thousand words, if A = B, then B = A.  You can read the whole thing right here.