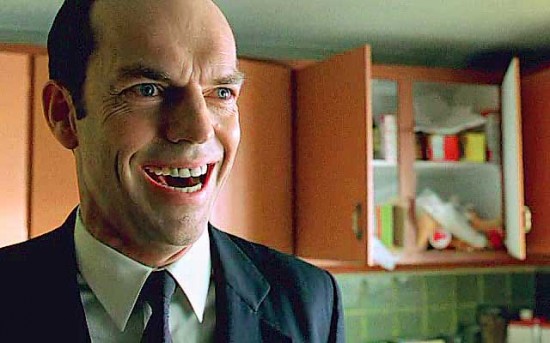 Veteran chameleon Hugo Weaving is reportedly in final talks to play Red Skull in the Captain America movie.  According to The Hollywood Reporter:

The dealmaking with Weaving is in a delicate stage that will play out in the next day or so. Agencies grouse that Marvel plays hardball in the negotiating process and also demands multi-movie commitments, though the latter usually applies to actors playing its heroes.

In addition to his ability to look and sound wildly different from film to film, Weaving is also a really good actor; capable of taking flamboyant, manic characters and imbuing them with a deadly seriousness and subtle emotion.  Even, we might add, if he can’t use his face.

Yes, this was the creepiest picture of Hugo Weaving that I could find, why do you ask?

Topless Robot via /Film via The Hollywood Reporter