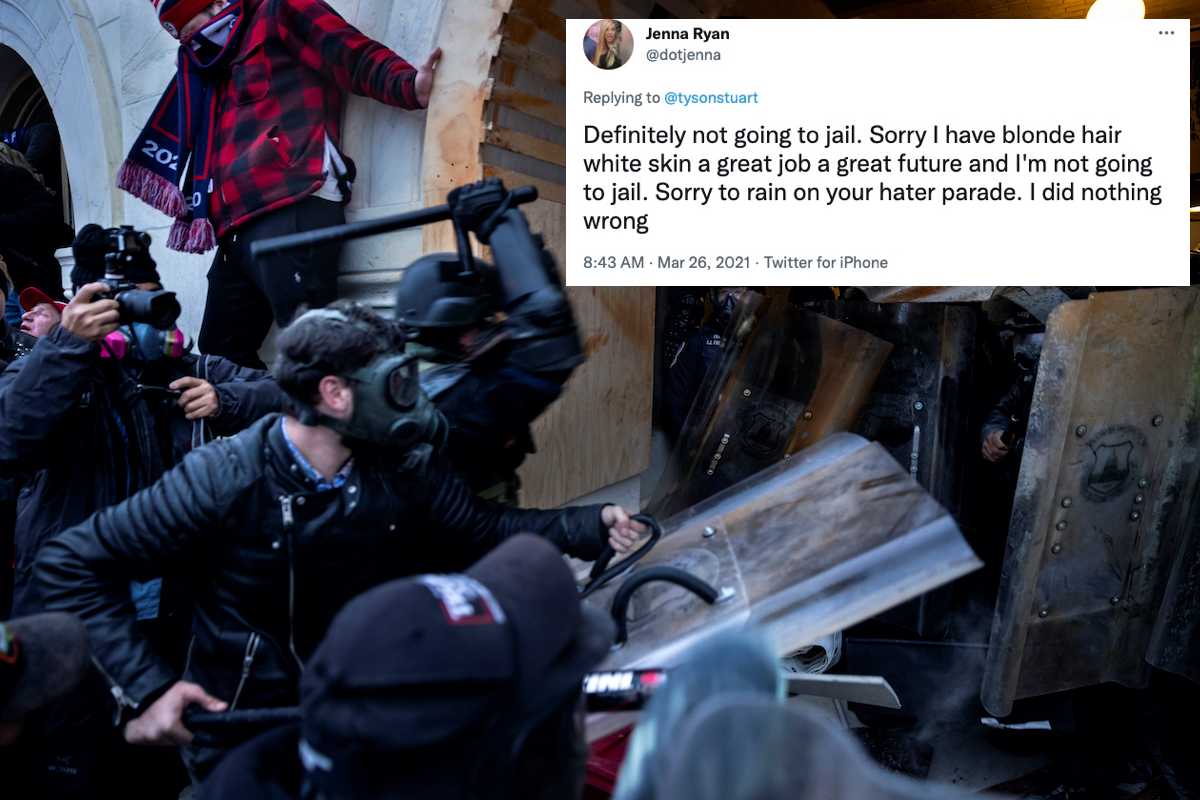 While some of the participants in the January 6 Capitol riot have expressed remorse, on the complete opposite end of that spectrum is Jenna Ryan.

Ryan seemed to fancy herself a sort of MAGA “influencer” and she documented her trip from Texas to Washington DC in detail. She shared photos and video of the private plane she took to go help overthrow our Democratic processes, posed outside of the Capitol, and even live-streamed herself entering the building.

“We’re gonna go down and storm the Capitol. They’re down there right now and that’s why we came and so that’s what we are going to do. So wish me luck,” she said live on Facebook.

“We are going to f**ing go in here,” she said in the video. “Life or death, it doesn’t matter. Here we go.” She then turned the camera on herself and told viewers, “Y’all know who to hire for your realtor. Jenna Ryan for your realtor.”

Ryan was clearly having the time of her life, feeling very important. She called January 6 “one of the best days of my life.”

She also wrote on Twitter that she was “Definitely not going to jail.”

“Sorry I have blonde hair white skin a great job a great future and I’m not going to jail,” she wrote. “Sorry to rain on your hater parade. I did nothing wrong.”

Ryan wrote that back in March of this year. Today, she was sentenced to 60 days in jail. Oops!

In a letter to the judge in her trial, Ryan tried to deny that saying she would not go to prison indicated she thought she was above the law.

“I wasn’t saying I was above prison, I just felt that it would be unlikely since I was pleading to entering the Capitol for 2 minutes and 8 seconds. Now I realize that was a false notion, but having a false notion does not automatically mean I deserve incarceration,” she wrote. “A tweet of me taking up for myself against a bully who is harassing me does not indicate that I feel above-the-law.”

Ryan does seem to be very concerned about “bullying.” (By the way, the instance of “harassing” that led her to claim her whiteness would keep her out of prison was comprised of someone posting the Oprah “you get a car” meme with the text “You goin’ to jail, you goin’ to jail, everybody goin’ to jail.” Harsh words, indeed.)

Earlier this week, she tweeted (yes, she’s still tweeting) that she was “starting a new nonprofit organization for anti-bullying” where she “will advocate and raise awareness  about cyber bullying and cancel culture.”

I suppose jail is the ultimate cancelation. Why wouldn’t she try to keep grifting off of it?