A Lawyer Representing Capitol Riot Defendants Is Giving Her Clients the Basic U.S. History Lessons They Never Got in School

And for some, it's actually making a real difference. 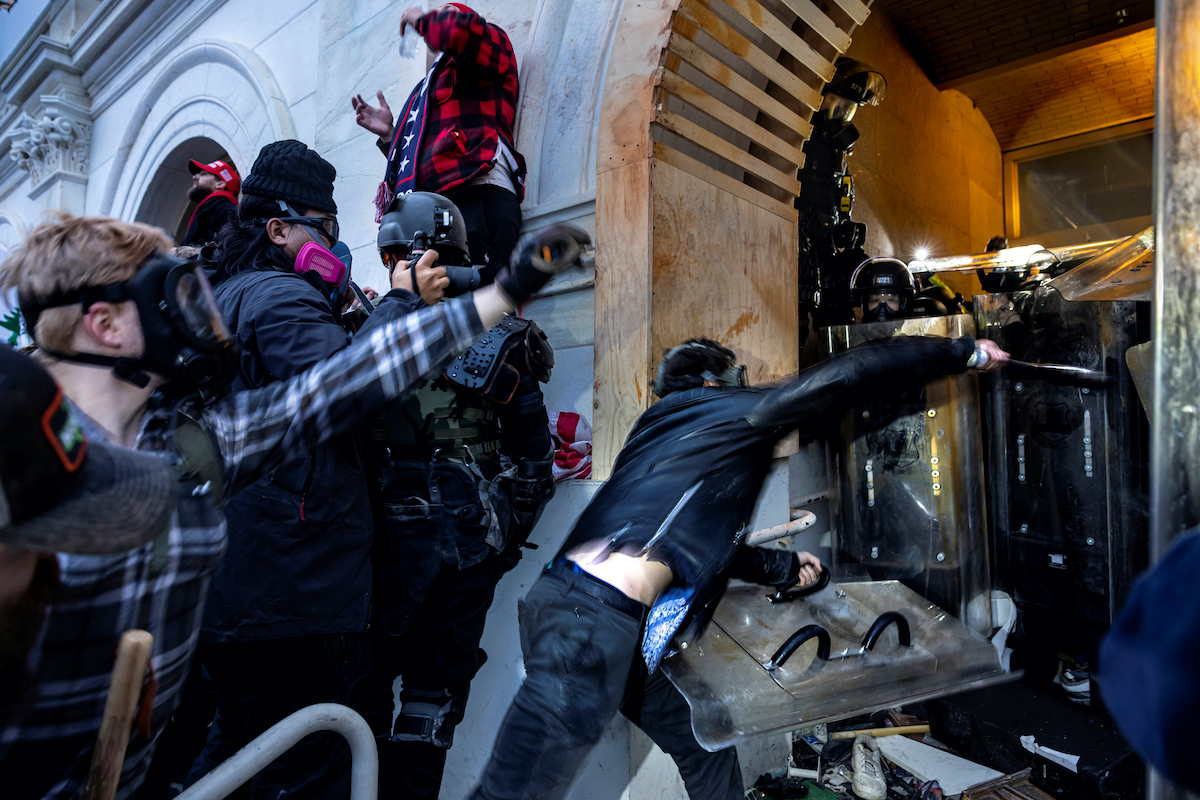 Since the January 6 riot at the U.S. Capitol, much has been written of the alternate reality so many of Donald Trump’s most fervid supporters exist within, and how their skewed worldview could possibly have led them to participate in such an extreme act. In that reality, Trump is the true president and Democrats engaged in a vast conspiracy involving George Soros and a deceased Venezuelan dictator to steal the election, and the only solution was a violent attempt to stop the government from carrying out basic election processes.

There are other elements to that version of reality that can be truly baffling to the rest of us: the idea that white people are the most persecuted U.S. demographic, that racism doesn’t exist (and that talking about racism is further white persecution), that wearing a mask during a pandemic is a violation of personal freedoms, and that immigration is the greatest threat to Americans’ way of life—just to name a few.

Some of these ideas are the product of a massive disinformation campaign, the result of spending years subjecting oneself to Trump, Fox News, and excessive Facebook use. But a lot of them also depend on a fundamental misunderstanding of our country’s history.

A lawyer representing a number of people charged with participating in the January 6 attack on the U.S. Capitol has been giving her clients the kinds of basic history lessons they would hopefully have learned early on in life but didn’t.

H. Heather Shaner is assigning her clients reading lists and viewing material designed to teach them about things like slavery, the Holocaust, and Native American genocide—basic parts of our collective history.

And amazingly, it seems to be making a real difference for some of them.

Here’s an excerpt from a letter one of Shaner’s clients wrote to the judge presiding over her case after working through some of her assignments:

I’ve lived a sheltered life and truly haven’t experienced life the way many have. I don’t live a pampered life. My husband and I have worked hard for everything that we have. My lawyer has given me names of books and movies to help me see what life is like for others in our country. I chose the movie whenever possible because it sinks in better. I’ve read the book, Just Mercy, by Bryan Stevenson and the Bury my Heart at Wounded Knee, by Dee Brown. I have viewed movies including Mudbound, Schindler’s List, Slavery by Another name, and Burning Tulsa on the History Channel. I’ve learned that even though we live in a wonderful country things still need to improve. People of all colors should feel as safe as I do to walk down the street.

That comes from Anna Morgan-Lloyd, a 49-year-old woman from a “very small town” in Indiana. She explains in the letter that she’s always been a registered Democrat but that she and her husband found themselves supporting Trump because even though they “didn’t like him at all before,” they felt “he was standing up for what we believe in,” although she didn’t expand on what those beliefs were.

Shaner told HuffPost that Morgan-Lloyd and her other female client (Annie Howell, who publicly blamed antifa for the destruction caused during the insurrection) have taken to her attempts to educate them about the basic elements of American and world history, and that they both now have library cards for the first time in their lives:

“Both my women are like, ‘I never learned this in school. Why don’t I know about this?’” Shaner said. (A couple of the male clients weren’t quite as eager students, she said. “The men are very much like ‘Oh, I’ll get to it.’” But she said some of her male clients have been doing some self-education.)

In a memo asking the court to sentence Morgan-Lloyd to probation rather than incarceration (a plea that was ultimately successful), Shaner writes about her client’s education journey:

I have had many political and ethical discussions with Anna Lloyd. I tendered a booklist to her. She has read Bury My Heart at Wounded Knee, Just Mercy, and Schindler’s List to educate herself about “government policy” toward Native Americans, African Americans and European Jews. We have discussed the books and also about the responsibility of an individual when confronting “wrong”.

She has viewed “Burning Tulsa” on the History Channel, as well as the films “Just Mercy” and “Mudbound.” She watched part of the series on the U.S. Constitution, produced by the James Madison Montpelier Foundation. She did this to educate herself and to learn the American history she was not taught in school. She has worked hard to come to terms with what she believed before January 6th, 2021 and what she has learned since then.

While people obviously have to accept accountability for their choices and their actions (which Morgan-Lloyd has), it’s also devastating to see just how deeply this country’s education system has failed us—especially at a time when so many conservatives and Republican politicians are fighting tooth and nail to teach an even worse, more whitewashed version of history in schools.