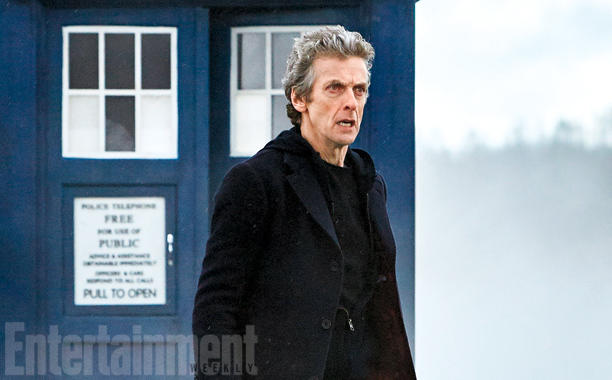 In an interview over at EW, Doctor Who’s Peter Capaldi dropped hints about the above image from Season 9 and described what it was like to work with “tiny tornado” guest star Maisie Williams.

Capaldi revealed what little he’s at liberty to say about the upcoming season, explaining that the first photo “shows the Doctor about to make a mistake that has cataclysmic repercussions,” and that the series will open with the Doctor avoiding his feelings:

He’s throwing himself into life with a newfound hunger for adventure. He’s in pursuit of joy and grabbing every thrill that he can along the way. But I sense him running from something, that even he does not yet understand.

Delightfully, Capaldi said that Maisie Williams’ time on the show was a very educational one for him:

Maisie is fantastic. A sharp, talented tornado. As an 18-year-old, she has taught me many new words and expressions. All I’ll say about her character is she shifts in cosmic ways.

Youths! What will they teach us next!

Are you excited for next season, gang? Will you at least tune in for Maisie’s Who debut?