Candice Patton on Female Characters Being Flawed | The Mary Sue

Candice Patton on Female Characters Having Permission to be Flawed 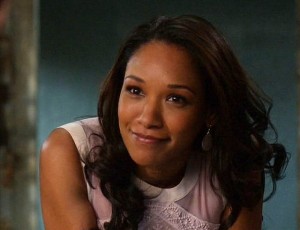 In the never-ending quest for Nuanced Female Characters, we must first acknowledge that some of those nuances might involve less-than-desirable qualities. It may mean that said female character doesn’t have her ish together the way we’d like, or prioritize the things we would. Not everyone has been thrilled with the evolution of The Flash‘s Iris West, for example. However, the actress who plays her, Candice Patton, is quick to lay the verbal smackdown, and makes a really valid point.

In an interview with Zap2It, Patton talks about the fact that because there’s such a dearth of nuanced female characters, the few female characters that exist are held to an unreasonable standard. According to Patton, audiences have grown accustomed to expecting their female characters to be damn near perfect. And Heaven forbid they do anything for love. Or not have their lives completely together. Or not be completely knowledgeable about all things at all times. Here, I’ll just let her tell it:

I think some audiences today are reticent to actually watch characters, especially women, have an arc. They want their women to have it all together the moment they see them and keep it together all the way through, which is just not true of human nature. What drew me to Iris is that we met her as a young woman who is trying to find herself in her career and her relationships. We have to allow characters to evolve, to have these arcs, because without them, they’re not characters, they’re just archetypes.

It’s an interesting point, and I have found myself thinking along similar lines. Male characters can be downright buffoons, and we’re still expected to identify with and root for them as protagonists. Female characters are rarely allowed to be incompetent, or to fumble, or to make mistakes. There seem to be two choices for female characters that TV viewers have historically accepted. Either they are the “voice of reason” (ie: nag) who is completely competent and together and better than the male character at just about everything (but by the end of the show/film/story he ends up surpassing her anyway, because reasons), OR we have no idea how competent they are, because the male characters in the story continually talk over or deny them. It’s rare that we see female characters actually be incompetent or not-perfect, rather than simply thought to be.

The Flash is actually a great example of a show that allows its women to fail without it being sexist. When Iris West or Caitlin Snow screw up, there are character-based reasons for it. We also know that they are generally really competent at what they do, because they’re allowed to be that, too. What’s more, the men in their lives treat them with respect and believe in them (despite the gratingly annoying device of Barry not telling Iris about being The Flash for so long to protect her. Ugh).

Male characters are allowed to be less-than-perfect all the time, and viewers are expected to be in their corners in spite of it. It’s time more of us treated our female characters with the same courtesy. Of course, it’d be nice if we extended that courtesy to women in real life, too.