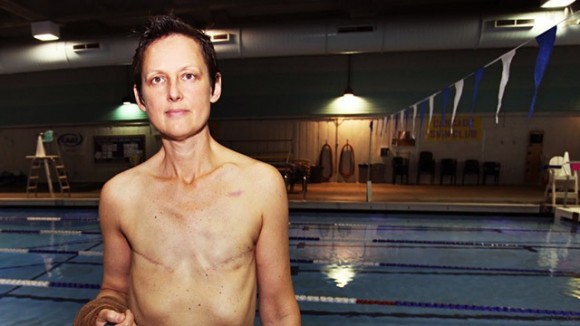 When Jodi Jaecks, a breast cancer survivor who underwent a double mastectomy, decided she would try swimming in order to achieve the level of physical fitness she had before she started chemo, she ran into a bit of a problem — there weren’t any swimsuits that fit her comfortably. Not one to be deterred, she ditched the idea of finding a comfortable suit and decided to swim topless instead.

But before that, when she found the tell-tale lump in her right breast, a photo of a breast cancer survivor who had a double mastectomy ultimately led her to the decision to have both of her breasts removed: “It’s such a powerful image. She’s so healthy and fit. It showed me I could be in shape again. I could be happy again,” she said, citing the feeling of empowerment it gave her to undergo the mastectomy in lieu of removing the lump and waiting for the cancer to possibly resurface.

However, when Jaecks decided to pursue swimming in order to recover her fitness left devastated by chemotherapy, she couldn’t find any comfortable bathing suits that didn’t hurt her scars. “They felt absolutely horrible,” she said, even the rash guards and triathlon tops she tried on. Resolved to swim, Jaecks ultimately gave up looking for a top and petitioned the Seattle Parks and Recreation Department for the ability to swim topless instead.

Initially, the answer was no. The requirement of “gender-appropriate clothing” was a “long standing policy that had been in effect for a lot of years and it had never really been challenged,” said Dewey Potter, the communications manager for Seattle Parks and Recreation. But after a Seattle weekly newspaper ran a photo of Jaecks topless, the parks department changed their mind, stating that they would “allow this woman to swim and look at further cases one by one.”

Although she was ultimately approved to swim topless, the decision does not rest entirely well with Jaecks: “I didn’t want this to be personal. I thought it was a bigger political issue…I’ve been thinking since yesterday…if I want to approach the parks department personally again to see if I can have a meeting with them to try to sway them to try to make it more of a policy decision instead of just unique to me,” she said, determined to pave the way not just for herself, but for all women who had a double mastectomy without reconstructive surgery.

Beyond shedding a light on the plight of breast cancer survivors, her story raises a few questions: Why enforce gendered rules across the board to begin with, especially considering that many women do not have breasts? Why are breasts intrinsically sexual objects unless they succumb to breast cancer? Although there may not be a radical change in clothing policy at the Seattle public pools anytime soon, thanks to Jaecks, a few small steps may be in the works: “We’d like to hear from people who have had surgeries and hear what they think might be an appropriate approach and listen to that and possibly shape a policy out of that,” Dewey said. “But in the meantime we will look at the policy case by case.”