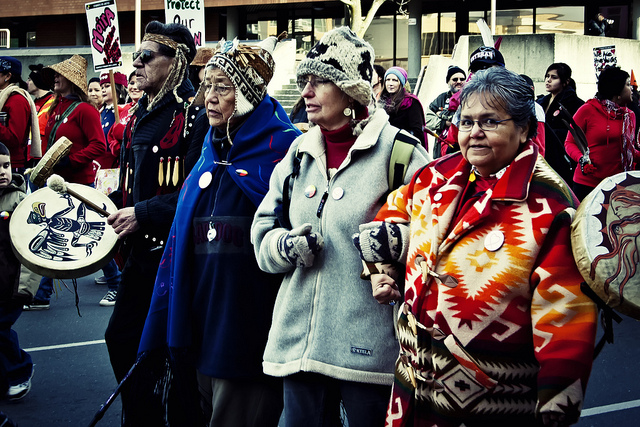 In Canada, while indigenous women make up only 4.3% of the country’s female population, they make up 16% of all female homicide victims, and since 1980, over 1,100 First Nation women have been killed or gone missing with no one looking into their deaths and no justice served. Despite the casual dismissal of the problem by former administrations, current Canadian Prime Minister Justin Trudeau has made these senseless deaths and disappearances a national priority.

On Tuesday, Trudeau spoke at the Assembly of First Nations Special Chiefs (the first PM in recent memory to attend, apparently), announcing the launch of an investigation into the cases of these women who’ve been disproportionately targeted because they are native. According to the AP, he said:

The victims deserve justice, their families an opportunity to heal and to be heard. We must work together to put an end to this ongoing tragedy.

This is a sharp contrast to the attitude held by the previous administration, headed up by former PM Stephen Harper who, in an interview with the CBC, when asked directly about this particular issue said:

[I]t isn’t really high on our radar, to be honest. [But] Our ministers will continue to dialogue with those who are concerned about this.

Obviously, there’s a lack of respect for women and girls on reserves. So you know, if the guys grow up believing that women have no rights, that is how they are treated.

And so any laws they came up with to supposedly protect these women were only applicable to First Nation people living on reserves. Never mind, you know, racism. When sixteen-year-old First Nation girl, Rinelle Harper, who suffered a brutal physical and sexual assault last year that was intended to kill her, called for a national inquiry, Valcourt responded with:

​Listen, Rinelle, I have a lot of sympathy for your situation. And I guess that victims … have different views and we respect them.

And this was the Minister of Aboriginal Affairs. The person in charge of dealing with these issues! “Have different views?” Um, yeah. Silly victims think that crimes should be investigated and punished. Crazy, right?

Thankfully, Trudeau’s administration seems leaps and bounds better in dealing with this, and many other of Canada’s concerns. Current Justice Minister Jody Wilson-Raybould, who is the first indigenous person to serve in that position, outlined the plan for the investigation on Tuesday as well, saying that the first order of business is for them to meet with the families of the women and girls missing or murdered, as well as advocacy organizations, to hear from them what they hope the investigation will achieve. She told the CBC:

Doing better requires openness and the ability to listen. We have heard this loudly and clearly, and we have heard that this cannot be just another report.

The indigenous community in Canada is responding well to the effort, grateful that their government seems to finally be taking them seriously. Assembly of First Nations National Chief Perry Bellegarde had this to say to the CBC:

After years of denial and deflection, it is my hope we can make real strides in achieving justice for families and achieving safety and security for all our people.

Native Americans still have a long way to go before the crimes against them are healed, despite a visit from the U.N. Special Rapporteur on the Rights of Indigenous Peoples back in 2012, after which it was recommended by the U.N. that in order to uphold its endorsement of the U.N. Declaration on the Rights of Indigenous Peoples in 2010, the US government should, among other things, return sacred lands to the control of Native communities. It’s 2015 now, so…

Despite that, it’s good to see that there are at least some indigenous women in the world finally getting the respect and care they deserve. The missing/murdered First Nation women of Canada are joining the missing/murdered women of Juarez in finally starting to get some long-overdue justice this year, which is an amazing start.