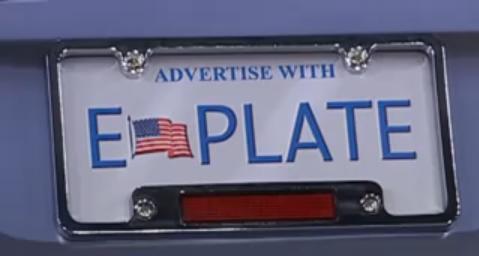 Oh California Legislature, have you not heard of hackers? A bill is making its way through the California congress that would pave the way for electronic license plates that play ads when their vehicles are stopped. When the vehicle is in motion, it would display a standard license plate, but when the car stops, say, at a red light, the license plate would erupt into a brilliant, distracting fury of paid-for colors telling you to invest in something.

The unfortunate piece of legislation was authored by Democratic Sen. Curren Price of Los Angeles, who told the Mercury News:

“We’re just trying to find creative ways of generating additional revenues. It’s an exciting marriage of technology with need, and an opportunity to keep California in the forefront.”

California certainly does have need with it’s $19 billion deficit (terminate THAT, Schwarzenegger!) but this doesn’t really seem like a “need.” Rarely do I find myself thinking “Boy, you know where advertising could really hit home with me? In traffic. That is where I am most positively receptive to external stimuli.” Advertisers don’t need the reputation of being “that company” that made “that ad” everyone hates which subsequently caused “those crashes.”

But also, how could these possibly not be hacked instantly? People will be driving around with any license plate they want, which will conveniently not be the one that’s on record. And possibly the plate number could be changed remotely with the push of a button. This would put an end to speeding cams (good thing, possibly) but also to catching any criminals who use cars (bad thing, definitely).

But those crazy legislators don’t see these possibilities as likely, and, according to the Mercury News, “The bill has received no formal opposition. It passed unanimously through the Senate last month and is scheduled to be heard Monday by the Assembly Transportation Committee.”

(Via Mercury News via Slashdot)