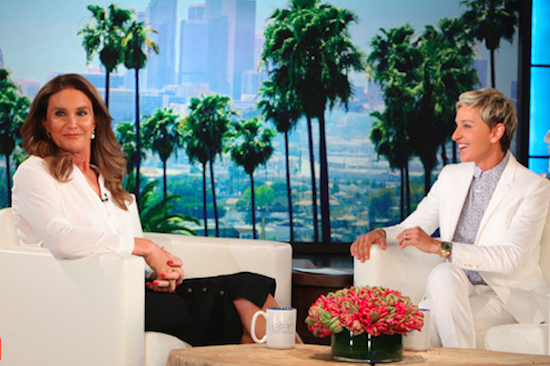 No one ever gets it completely right when it comes to how best to advocate for marginalized groups—even those in marginalized groups themselves, because they sometimes operate under the misguided notion that they’re qualified to use their experiences to talk about the experiences of other groups. While there are certainly areas in which the oppression of different groups overlap or have things in common, every group still has its own areas of privilege and their own blind spots.

Caitlyn Jenner recently gave her first-ever talk show interview on Ellen, and it wasn’t at all the usual softball stuff that you’re used to seeing on daytime TV. DeGeneres made it a point to ask Jenner about her Republican politics, same-sex marriage, and how her transition affects how she sees those things. You can see a segment of the interview in the video below:

Jenner’s answer, and the ensuing conversation, is uncomfortable to watch. It’s clear that, while Jenner is resigned to same-sex marriage as a legal inevitability, it still doesn’t sit too well with her personally. However, she puts her personal views on the subject aside enough to be able to say, “I don’t ever want to stand in front of anybody’s happiness.”

Now, in an ideal world, Jenner’s transition would make her inherently embrace the idea of two people of any gender who love each other getting married without any residual hesitation or squick (as she would be a lesbian if she’s still primarily attracted to women). However, we live in a real world, where people are multi-faceted and sometimes contradictory. Jenner answered in the best way possible … for someone who has always believed what she does: I don’t want to stand in the way of others. Despite my personal beliefs, I will not infringe on someone else’s life. Yet, DeGeneres wasn’t satisfied with that. She seemed determined to either make Jenner change her mind right there on her show, or else expose her hypocrisy.

And compare it to what Jenner said about same-sex marriage in her interview:

But as time has gone on I think, like a lot of people on this issue, have really changed their thinking to I don’t ever want to stand in front of anybody’s happiness, you know? That’s not my job.

So … they both want people to be happy. Great! And they both … seem to have some residual uncertainty and hesitation about groups of which they are not a part—or in the case of Jenner, of which haven’t fully come around to accepting they’re a part.

And maybe that’s the difference. Jenner, if she’s still primarily attracted to women and is a trans woman, is a lesbian, and so the fact that she could still not be completely on-board with same-sex marriage seems self-hating and doesn’t seem to make sense. However, DeGeneres’ reaction is troubling too, because trans people—despite being part of the LGBTQ+ acronym—are often the ones thrown under the bus by the other letters.

In her response to the interview with Jenner, DeGeneres was letting her cis privilege show, and it didn’t seem all that different from Jenner’s response to the idea of same-sex marriage. It was an attitude of resignation. There was a similar tone of voice. I don’t get it, but I want you to be happy so … fine. Do what you want. What’s more, she was allowing Stern and his producer, Robin Quivers, to criticize Jenner’s hypocrisy while benefiting from her cis privilege, which prevented Stern and Quivers from seeing her own.

It seems weird to me that she was so insistent about getting Jenner to “see the error of her ways,” while openly admitting (and treating as totally understandable) that she doesn’t entirely get trans people.

Both Jenner and DeGeneres seem to be doing what they can to learn, and this is a good thing. Jenner has been using the experience of I Am Cait—how successfully is debatable—to parse all these issues not only for herself, but for a viewing audience. Meanwhile, DeGeneres had Jenner on her show presumably to learn more about trans issues. As reported by Pajiba about the interview:

[DeGeneres] took a strong stance of curious and open ignorance for the interview. She admitted that she wanted to be supportive and wanted to learn, but, like many of her viewers, didn’t fully understand trans issues. As such, she asked questions Jenner had previously stated she didn’t want to talk about (like her romantic life), and had one prominent moment of misgendering (which isn’t in the clip, and which she immediately corrected and apologized for, but to which she also gave the weird self-pardoning response (“See? It happens all the time”).

They’re both learning how to operate in a brave new world—a world in which people are becoming more savvy about gender and sexuality, and in which whom you love or how you identify matter less and less. I hope that, one day, Jenner feels confident either 1) identifying as a lesbian or 2) knowing that how anyone identifies is no one’s business, and shutting down the question purposefully (as opposed to dodging it bashfully the way she’s been doing up until now). Meanwhile, I hope DeGeneres learns more about trans people and their issues, and at least realizes that it’s not up to her to “get” trans people, because it’s likely she never will. The important thing is that no one stands in the way of anyone’s happiness.

But hell, I’m a cis, historically heterosexual woman dating a trans woman, so what the fuck do I know? Thoughts? (Particularly from folks actually in any of the above-mentioned groups?)