A Bystander’s Guide to Standing up Against Islamophobic Harassment (and Other Types of Harassment, Too) 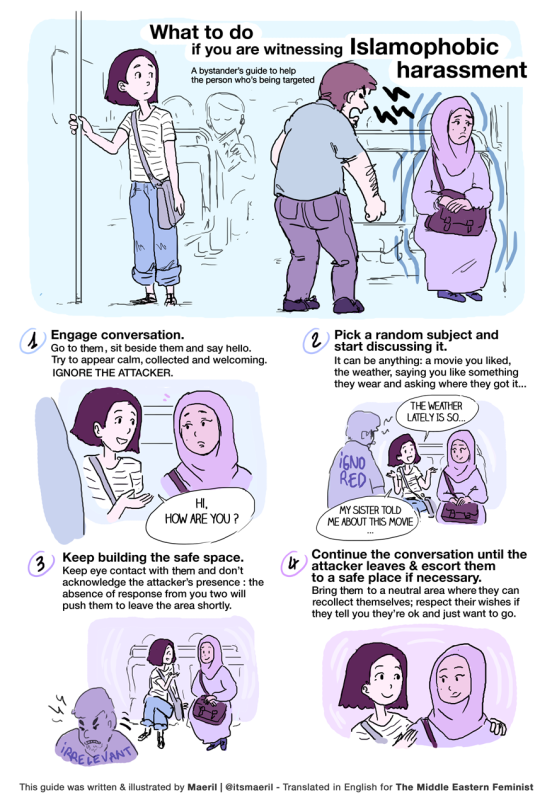 A Paris-based illustrator and filmmaker who goes by the handle Maeril on Tumblr has posted a short and helpful illustrated how-to guide for bystanders who want to step in and help someone experiencing Islamophobic harassment in a public place. She also made a version with a French translation as well, since she specifically hopes that her guide will help bystanders combatting the growing problem of Islamophobia in France.

In her post about the guide, Maeril elaborated on that: “Some could say: ‘yes but you can use that technique for instances of harassment other than Islamophobic attacks!’, and my reply is: Sure! Please do so, it also works for other ‘types’ of harassment of a lone person in a public space!! However I’m focusing on protecting Muslims here, as they have been very specific targets lately, and as a French Middle Eastern woman, I wanted to try and do something to raise awareness on how to help when such things happen before our eyes–that way one cannot say they ‘didn’t know what to do’!”

The guide certainly will aid bystanders who “do not know what to do,” since it’s very straightforward. For those using screen-readers, here are the steps outlined in Maeril’s illustration:

1.) Engage conversation [with the person experiencing harassment, not their attacker]. Go to them, sit beside them and say hello. Try to appear calm, collected and welcoming. IGNORE THE ATTACKER.

2.) Pick a random subject and start discussing it. It can be anything: a movie you liked, the weather, saying you like something they wear and asking where they got it…

3.) Keep building the safe space. Keep eye contact with them and don’t acknowledge the attacker’s presence: the absence of response from you two will push them to leave the area shortly.

4.) Continue the conversation until the attacker leaves and escort them to a safe place if necessary. Bring them to a neutral area where they can recollect themselves; respect their wishes if they tell you they’re ok and just want to go.

Maeril told Buzzfeed that the comic is inspired by a psychological concept called “non-complementary behavior,” which involves responding to an aggressor with a warm demeanor, rather than responding with further aggression that could escalate the conflict. In Maeril’s example, the guide also relies on specifically caring for the person being attacked and centering their comfort, as well as their ability to leave the situation safely. It’s a great set of tips for defusing a horrible situation, and it could end up ensuring the safety of someone else with only a few minutes of emotional effort on your part.

(via Buzzfeed, image via Maeril on Tumblr)