He will be missed by no one. 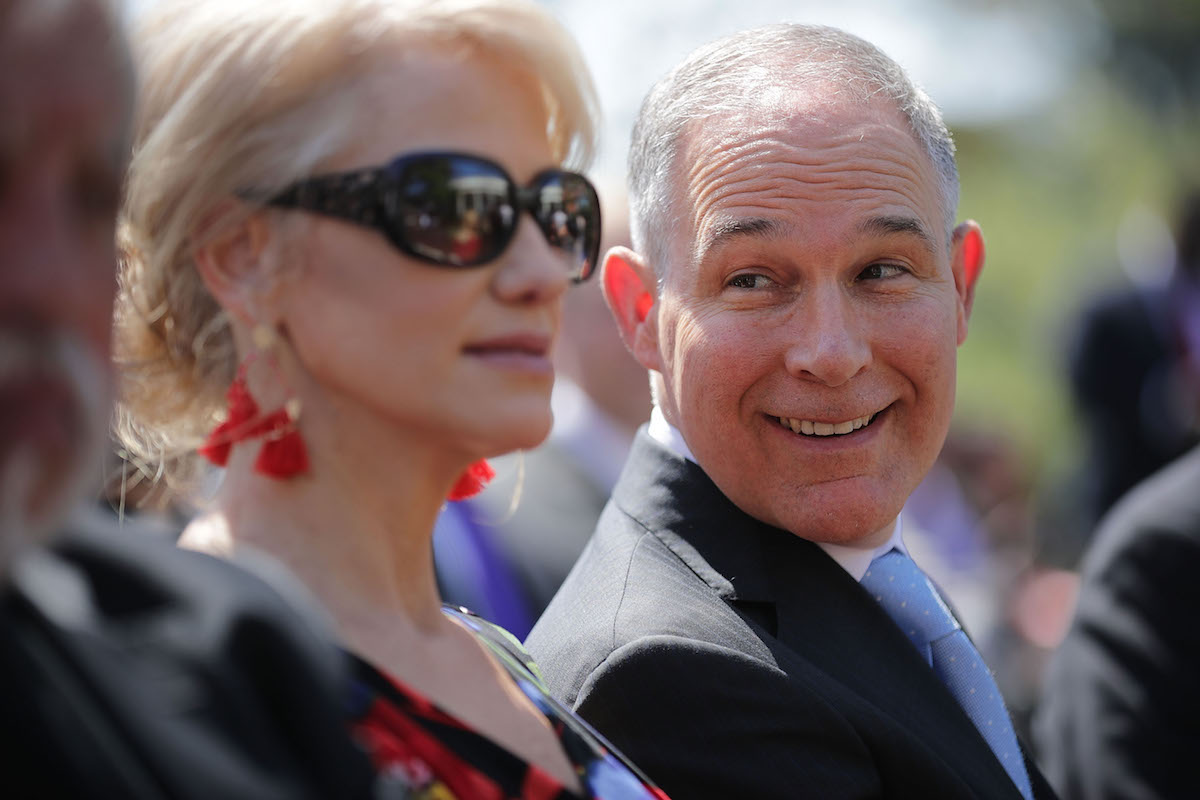 Scott Pruitt, the head of the Environmental Protection Agency who has repeatedly demonstrated he cares almost as little about the environment as he does about ethics, has resigned, according to tweets from Donald Trump because that’s just how political news is delivered now. Everyone update your lists accordingly!

TIME TO UPDATE THE BOARD!

Scott Pruitt’s tenure has been filled with … I don’t even want to call them “scandals,” as that implies at least some level of competence in his misconduct. Scott Pruitt’s corruption takes the form of pure stupidity. There are more than a dozen open investigations looking into Pruitt’s potential ethics violations, from using upwards of $3 million of taxpayers’ money to fund his family’s vacations to accepting heavily discounted housing from lobbyists who just happen to get jobs or approval for their projects. The man spent $1500 dollars on “tactical pants.” He made EPA aides assist him in an attempt to get his wife a job with Chick-fil-A. He had them retroactively erase meetings from his calendar before releasing his schedule to the public. One former aide believes she was fired specifically because she pushed back against this illegal instruction.

Pruitt’s security detail (which cost taxpayers nearly $3.5 million in his first year, about triple the cost of his predecessors’ details) had to run mundane and sometimes bizzare errands like picking up his dry cleaning, and “taking him in search of a favorite moisturizing lotion” available only at Ritz-Carlton hotels. Other aides were tasked with purchasing a used Trump hotel mattress for him. So, you know, your job could probably be worse.

Per NBC, there were actually 16 investigations of Pruitt as of last week. The one investigation that was completed found that he had broken the law. There are 15 still ongoing.

Pruitt may be terrible at corruption, but he has been unfortunately effective when it comes to undermining the department he runs. He repealed Obama-era plans for curbing greenhouse gas emissions, oversaw massive cuts to funding for climate change research, and overhauled EPA rules for science advisors, citing the Bible as reasoning. And don’t forget about that whole trading favors from lobbyists for things, jobs and pipeline expansions.

Pruitt is the manifestation of everything wrong with politics. He’s so awful, even Laura “Not Enough Love for Immigrants” Ingraham knows it.

Pruitt is the swamp. Drain it.

Honestly, that’s just the tip of the full iceberg of controversies. But it gives you a good idea of why Pruitt’s departure is being mourned by exactly no one.

Pruitt resigning to spend more time stealing from his family.

Scott Pruitt resigned because he was unusually greedy and weird with his corruption but his worst transgression was that he systematically worked on behalf of polluters to poison our air and our water and make climate change worse.

As if we didn’t have enough to make fun of Pruitt for, his resignation letter was leaked and it is a LOT.

Honestly people should continue to hassle him in public just for this https://t.co/vMPx6w28Et

On top of everything else, we now learn that Scott Pruitt is a terrible writer.

Pruitt’s resignation letter reads like he dictated it while crawling backwards through the court of Henry VIII.

Eternal kudos to this woman who interrupted Pruitt’s lunch earlier this week in order to urge him to resign. Dreams can come true.

Not that his replacement is that big of a step up. But still, the absence of Pruitt is always a thing to be celebrated.