End of an Era: Chuck E. Cheese to Lose Its Iconic Animatronic Band 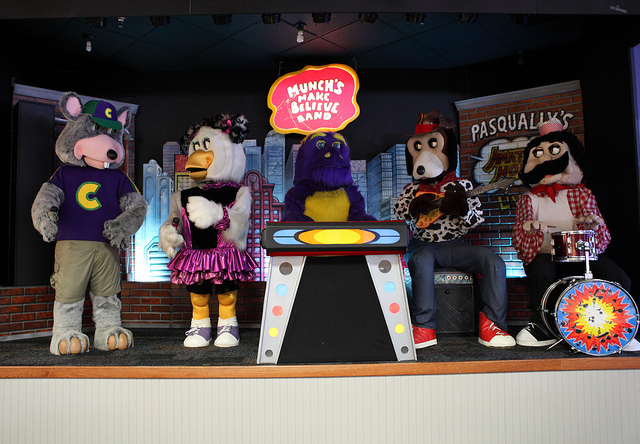 Your childhood is vanishing, one animatronic at a time.

Chuck E. Cheese’s, the restaurant/arcade/ball pit of horrors that where you just had to have your 7th birthday, is starting to phase out the animatronic band that’s installed at just about every one of their franchises. For now, the company is looking to break up Munch’s Make Believe band (née The Rock-afire Explosion) in a few select locations. Eventually, though, depending on response, it’s likely that they’ll all be gone in the not-too-distant future.

CEO Tom Leverton commented on the change, telling reporters, “It’s the biggest thing we’ve done for the look and feel of Chuck E. Cheese for two decades. The kids stopped looking at the animatronics years and years ago, and they would wait for the live Chuck E. to come out.” Frankly, I’m surprised that attendance at Chuck E. Cheese’s is still going steady. Then again, I’m not really their target demographic, so maybe that’s not too surprising after all.

Jury’s out on whether someone will make a Behind the Music-style documentary (yes, I’ve seen the Rock-afire Explosion documentary, thank you very much) as a goodbye to these stately, quaint, and woefully outdated animatronic bands.

It’ll be interesting to see how Five Nights at Freddie’s—a survival horror game based on the animatronics at play places like these—will respond. Moreover, that makes me wonder: what the hell are they going to do with all those old robots? I mean … it’s not like they can just dump them, can they? You just know somebody’s going to be installing these guys into a haunted house this year. Oh, man, I just had an idea: a Chuck E. Cheese-themed (okay, Chuck E.-adjacent) haunt! It really would be kind of like Five Nights at Freddie’s except you’re stuck walking around a freaky arcade waiting for morning for the doors to unlock.

I’d never go into the haunt, no way, but man, wouldn’t that be cool?