Ever Wondered How Many Insects Cars Kill in the Netherlands Per Year? 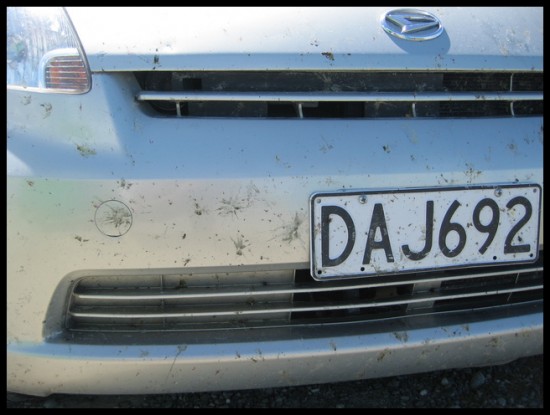 If you’ve ever gone for a long, cross-country drive, you’ve probably noticed the hundreds if not thousands of smooshed and splattered insects that tend to accumulate on fast-moving cars. It turns out that the exact number of these tiny fatalities, at least in the Netherlands, has been calculated by Dutch biologist Arnold van Vliet at around 133 billion per month.

To work all this out, van Vliet enlisted the help of Dutch drivers through a website called Splash Teller. Drivers were asked to count the number of squished bugs on their car’s license plates, and submit the death toll along with some other vital information via the website. Given the standardization of license plate sizes in a country, they make a suitable testbed for such a study. After receiving the results and figuring that the front of a car was some 40-times larger than the license plate, van Vliet concluded that about two insects are killed for every 6.2 miles of driving.

Of course, there are some issues with the study. First off, it used only reported findings of the bugs that stuck to the license plates. There could have been, for instance, far more bugs that were struck and killed by the car, but didn’t stick to the license plate. Secondly, the research only applies to one country and the insects particular to that country. However, Treehugger reports that a similar study carried out in the UK noted similar results, which would certainly bolster the Dutch claims. Treehugger went on to do some quick math of its own, and using the numer of cars in the U.S., and the average number of miles driven by U.S. drivers annually, they figure that somewhere around 32.5 trillion bugs wind up splattered in this country.

While the numbers certainly are interesting, van Vliet isn’t done with his study. He’s hoping to get a better idea of insect flight patterns, distribution, and habits through further analysis of the data. I’m sure those splattered insects are grateful that their deaths were not in vain.

(via Discoblog, image via ajft)