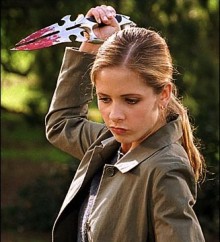 Last year, rumors began surfacing that Warner Bros. was planning on rebooting Buffy the Vampire Slayer with a new movie without the participation of the character’s creator Joss Whedon. The idea seemed so stupid that no one would possibly do it and, after, a few quiet months, that seemed to be the case. Today, however, they confirmed that this unholy abomination was actually happening. Lets all spend a few paragraphs thinking about the many reasons why this is the dumbest decision ever.

“Atlas Entertainment announced today it is rebooting the beloved franchise, Buffy the Vampire Slayer, with Warner Bros. Pictures. Atlas’ Charles Roven and Steve Alexander will produce the feature film alongside Doug Davison and Roy Lee of Vertigo Entertainment (The Ring, How to Train Your Dragon, The Departed). Whit Anderson is writing the script.

Warner Bros. Pictures optioned the rights from creators Fran and Kaz Kuzui, and from Sandollar Productions (Sandy Gallin and Dolly Parton), for Atlas and Vertigo to produce. Buffy the Vampire Slayer first appeared as a film in 1992, subsequently becoming a cult hit and spawning the wildly popular television series starring Sarah Michelle Gellar and David Boreanaz, among many others.

‘Whit approached us with an exciting idea about how to update Buffy,’ said Roven. ‘There is an active fan base eagerly awaiting this character’s return to the big screen. We’re thrilled to team up with Doug and Roy on a re-imagining of Buffy and the world she inhabits. Details of the film are being kept under wraps, but I can say while this is not your high school Buffy, she’ll be just as witty, tough, and sexy as we all remember her to be.’

Update: Joss Whedon himself has responded to the Buffy reboot in a statement to E! News: (h/t io9)

This is a sad, sad reflection on our times, when people must feed off the carcasses of beloved stories from their youths-just because they can’t think of an original idea of their own, like I did with my Avengers idea that I made up myself.

Obviously I have strong, mixed emotions about something like this. My first reaction upon hearing who was writing it was, “Whit Stillman AND Wes Anderson? This is gonna be the most sardonically adorable movie EVER.” Apparently I was misinformed. Then I thought, “I’ll make a mint! This is worth more than all my Toy Story residuals combined!” Apparently I am seldom informed of anything. And possibly a little slow. But seriously, are vampires even popular any more?

I always hoped that Buffy would live on even after my death. But, you know, AFTER. I don’t love the idea of my creation in other hands, but I’m also well aware that many more hands than mine went into making that show what it was. And there is no legal grounds for doing anything other than sighing audibly. I can’t wish people who are passionate about my little myth ill. I can, however, take this time to announce that I’m making a Batman movie. Because there’s a franchise that truly needs updating. So look for The Dark Knight Rises Way Earlier Than That Other One And Also More Cheaply And In Toronto, rebooting into a theater near you.

Fans of the series won’t go see it:

Does Buffy have an “active fan base?” Absolutely. They’re entirely right about that. In fact, Buffy has one of the most devoted groups of fans a television series ever had. However, the vast majority of them aren’t going to see this movie and there are a number of very obvious reasons why.

First off, the new movie won’t be anything like the series. I’m not just saying that. It legally can’t be. Due to the original 1992 movie, Warner was able to get the film rights to the character of Buffy Summers, woman who slays vampires. However, 20th Century Fox has the rights to everything that happened in the television universe. This means no Angel. No Willow. No Xander. No Giles. Literally, everything that happened on that show during the time when it was actually popular is off limits.

Secondly, the original series is still ongoing. I’ve heard a lot of people compare this to the upcoming Spiderman reboot. This really doesn’t follow. Whedon and his writers are still keeping these characters alive via comics and novels. This would only be similar if the new Spiderman movie had to compete with Sam Raimi and Tobey Maguire continuing that storyline at the same exact time! And even then it wouldn’t be the same. Spiderman fans are used to seeing new iterations of the web-slinger. There have been different writers, artists, cartoons, theme park rides, and everything for decades and decades. Buffy fans only have one Buffy. Sure, there was the movie before it, but I would guess that 90% of the fans who have seen it, only saw it after they loved the show and, when they did, they considered it little more than a curio they didn’t like.

Thirdly, Buffy fans aren’t just devoted to Buffy. They’re devoted to Joss Whedon. Like a lot. Like more than any other TV creator. And the show is so intrinsically connected to him that anything without his name is going to instantly feel false to these people. And these are the people that the new movie’s producers are counting on!

Most importantly though, even if the fans of the TV series did go see this movie (and paid to see it!), there aren’t enough of them. Does Warner Bros. not remember that the original “hit” series kind of got crappy ratings? It really only lived as long as it did because the networks it was on (The WB and UPN) felt the need to have at least one show that got good reviews. Yeah, 7th Heaven didn’t really bring in that many critics’ awards.

Non-fans of the series won’t go see it:

Here’s a question; why did the original, critically beloved series get mediocre ratings? Hmmm. Maybe it’s because not that many people give a crap about darkly comedic stories starring blonde vampire slayers that make it a point of subverting genre conventions while working as a deep and poignant metaphor. I know it’s hard for people who read a website called Geekosystem to believe, but this is a character that is custom designed for a niche audience. The original movie (which was made for a minuscule budget that you better believe would barely make up for the reboot’s marketing costs) only found a tiny audience. The TV series only found a tiny audience. We’ve already proven that the vast majority of people don’t want to see this story. So why do these producers think the new movie will suddenly catch on?

The thing is, Buffy is not Twilight. Buffy will never be Twilight. Twilight was a phenomenon that caught a perfect storm with Harry Potter fans looking for the next big YA craze, a dearth in the selection of female-based entertainment, and the beginning of the now five-year-old vampire craze. This reboot will be a vaguely familiar name that will leave all the people who didn’t watch the series weary that they’ve missed something. And we’ve already figured out what’s going to happen with the people who did watch the series. And, besides, the first novel in the Twilight series has sold 17 million copies. The highest rated season of BtVS had 5.3 million viewers. See the difference here?

Look, I love Buffy. In fact, I think the premise is so fun and ripe that this movie very well could be good. But, that doesn’t mean it’s going to be successful. It’s not. So, Warner Bros., I implore you, instead of insulting a bunch of fans and losing a ton of money on this sure-to-be bomb, just end this now and we’ll all pretend it didn’t happen. Buffy fans can do that. Hell, they already did it with the original movie.